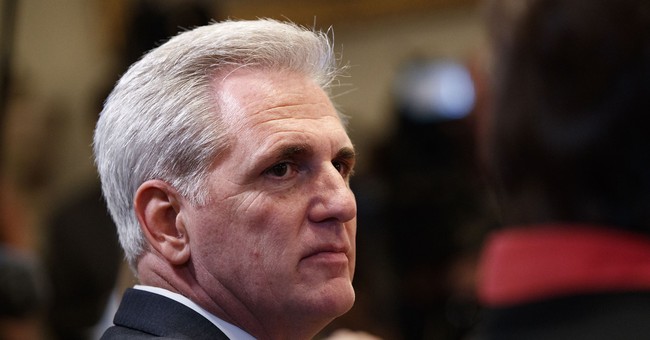 Despite a potential bloodbath for Democrats in 2022, House Republicans appear to be on the verge of a civil war as loud voices call on Rep. Liz Cheney to step down and GOP leader Kevin McCarthy was “caught” on a hot mic moment talking about how tired he is of her antics while she fights back just as loudly as her critics.

House Democrats have a seven-seat advantage right now, and seven Democrats in competitive districts have already said they are retiring ahead of 2022. The party in power (in this case, the Democrats) historically performs poorly in midterm elections. What’s more, despite media reports that some recent elections are “divisive,” the reality is that the Democrats have gone so far left they are pushing Hispanic voters and other moderate voters back toward the GOP.

With all of this going on, it’s insane for the Republicans to be fighting among themselves like this ahead of the 2022 midterms. At a moment when the party needs to be unified, they are instead fighting each other. And, just so we’re absolutely clear, both sides of this incredibly stupid fight are in the wrong here.

Liz Cheney is not wrong when she says what she has been saying about the 2020 election. You may not want to hear that, but it is the truth. The GOP base was talked out of even going to the polls by its own President and politicians, and they lost control of the Senate and the White House because of it.

Under more normal circumstances, this would not be a controversial tweet. Under more normal circumstances, it wouldn’t even need to be said. We are now four months removed from the January 6 riot and the loss of the Senate, and six months from the loss of the White House. The vast majority of voters have actually moved on, now concerned about what the Biden administration is doing (and by God, we should let them be!).

However, the Liz Cheneys and Mitt Romneys of the party seeking to keep their distaste for Trump as front and center as possible are purposefully trying to create drama and controversy because it looks great to the folks in the news media who get to interview them and write profiles about them. They forget, though, that the news media is filled with Democrats who otherwise hate them for being Republicans (after all, these very same people trashed Romney repeatedly 2012 and have done unspeakable things to Cheney’s father’s name in bygone eras).

Likewise, the loudest voices in the GOP caucus and the rest of the party’s leadership are all-in on swearing their fealty to the former President, who has been visited frequently by politicians but has been largely out of the mind of the average voter. Again, everyone is focused on the Biden administration and that is a good thing for Republicans. While Trump works to keep himself relevant by constructing a sort of weblog for himself, most people outside of the east coast media bubbles and the hyper-partisan bubbles have moved on, waiting for the next election and to vote based on how the current administration is acting.

The House Republican caucus, however, is behaving as though there are no actual leaders. One leader is still fighting old party battles against the last President and the other is allowing himself to get caught on a hot mic trashing her (I do not believe for a moment that the hot mic was accidental). The caucus is directionless, fighting old battles and generally letting itself get distracted from fighting an over-woke culture, the Democrats, and an agenda that will keep the U.S. in a recession longer than necessary.

But hey, as long as we make our stance on the last guy to run our party known, that’s all that matters, right?