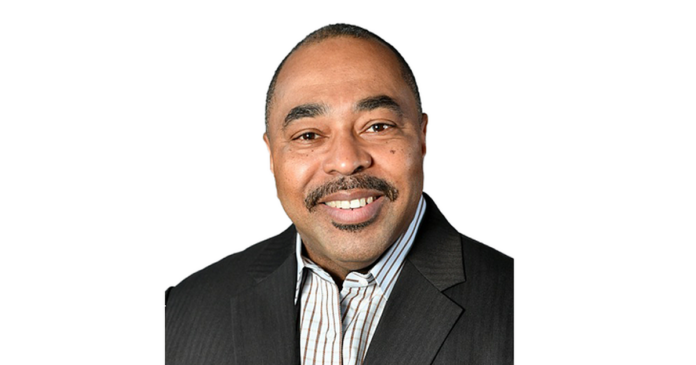 It’s time for a change in the 1st District. Our families are struggling under the weight of inflation and out of control prices. There is a growing crime epidemic in our communities and our children are suffering under a chronic underperforming education system. We don’t need a socialist ideologue that divides people based upon income, race and background. What we need is common sense representation that will put the interest of St. Louis and St. Louis County first; that is why I am running for Congress to provide real answers for real challenges.

Jones made his announcement at the construction site for the federal government’s new $1.7 billion National Geospatial Western Headquarters. According to the website, the NGA “provide[s] information that American soldiers, airmen, Marines and Coast Guardsmen need to navigate to their missions around the world and return home safely.”

This military project (located on the old Pruitt Igoe Housing complex grounds) will create thousands of good-paying jobs in an economically depressed area that has been neglected for decades. Having the NGA in St. Louis is making the region a vital resource for the technology being developed at the NGA. St. Louis recently hosted, for the first time, the nation’s largest geospatial conference.

St. Louis is also the home where Boeing’s F/A 18 and F-15 fighter jets are built, in addition to the MQ-25 unmanned aircraft system. The T-7A Red Hawk, a new advanced pilot training system for the U.S. Airforce, is also based in the Gateway City.

Defense contractors like Boeing are a vital economic engine for this region and any cutback in defense spending, not only hurts our national defense, but also hurts the region economically because of the loss of jobs any cut would entail.

“The Squad” member (and former Ferguson activist) Representative Cori Bush made it clear before she was ever elected that she was not a supporter of the police or of our military.

Bush made news recently when she made an unsubstantiated and outlandish claim that white supremacists shot at her and other activists during the Ferguson protests. As expected, the mainstream media’s “fact-checkers” have ignored Bush’s claims.

Glen Kessler, The Washington Post’s lead fact checker, and Daniel Dale, one of CNN’s leading political fact-checkers, have yet to touch the claim which the Ferguson Police Chief said he has no record of. Other fact-checkers like USA Today, Politifact, Factcheck.org and Lead Stories, which are tasked with policing sites like Facebook for claims they deem are untrue or need more context, have also failed to cover the claim. However, fact-checker Snopes did investigate Bush’s claim, eventually labeling it “unproven.”

The congresswoman’s claim was not fabricated out of thin air, but rather related to a specific alleged incident in January 2015. However, we have not yet been able to obtain evidence that supports her core claim, namely that known white supremacists did indeed shoot at protesters, in their capacity as protesters. Moreover, a key figure in the alleged events of that day told Snopes she never saw any individual responsible for the shooting (and therefore could not corroborate the claim that they were white supremacists), and also did not recall having seen Bush at the time.

Cori Bush’s surprising victory was due mainly to the inattentiveness of a politician who felt he couldn’t be defeated because of his political pedigree. In no way do I believe the First Congressional District is as “progressive” as Cori Bush. It was a perfect storm situation in 2020 that propelled her to victory. I believe another perfect storm is possible (and necessary) next year that could bring real leadership and real change to the district.

NOTE: I am an unpaid advisor for the Andrew Jones for Congress campaign.