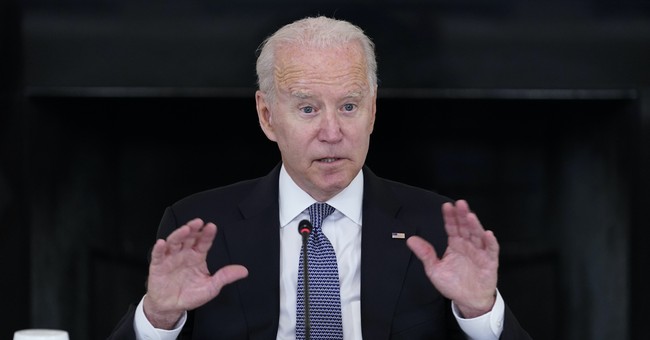 We’ve seen all kinds of efforts on the part of the Biden team to cover up for Joe Biden’s issues and incoherence.

They’ve done all they could to try to rush people out of the White House events, rudely yelling and basically pushing them out of the room, even cutting off UK PM Boris Johnson in the process. But it’s not as easy now that Biden is in the White House as it was during the campaign when they could hide him in the basement.

As my colleague Sister Toldjah explained, they even scrapped the traditional “Three Amigos” press conference with Canadian and Mexican heads of state. That followed multiple off-script errors from Biden.

“If Jen said that this is going to happen and there’s long-standing precedent of this happening and the most recent data point is yesterday where you guys had to clean up not only this Olympic comment, but his comment on the timing for the Fed and his Taiwan comment, is the worry that you don’t want the president taking questions? And if not, I think the best way to satisfy that would be to have the president out there tomorrow,” Sink said.

But instead, Meagher deflected and said they would have “pool sprays” which wouldn’t necessarily allow questioning Biden.

So you had the odd situation of Canadian PM Justin Trudeau actually answering questions about what happened in the meetings, but Biden failing to do so. Trudeau is not our leader and we have a right to have answers from someone who claims to occupy the office. Instead, we get blown off by these folks who think they have no real obligation to Americans. That’s shameful.

But there’s the basic Joe Biden rule — they can always go lower.

If you don’t like elevator music, you’re going to be hearing it where you wouldn’t expect it would ever be — from the White House team instead of any answers from Joe. Just like during awards shows when the speaker has gone on too long, now we’re going to hear music to signal the press that Joe Biden is out of there, as he totters off. No, seriously, I’m not kidding. Can we talk about reality show leaders now? This just adds to the fantasy-land quality of the Joe Biden experience. No wonder they have this on the fake White House stage.

You can see his tottering gait better on this video from Townhall.

Speaking of that, the physical that they gave Biden had a story for the gait, which at this point is marked and noticeable. The physical ascribed the gait problem to spondylosis and noted he also had some peripheral neuropathy in the feet. Fox’s Dr. Marc Siegel, who is a clinical professor of medicine at NYU Langone Medical Center, said he felt that assessment on the gait problem was insufficient.

“I don’t like that they ascribe his gait issues to a broken foot. First of all, why did he fall,” Siegel inquired, adding that the report also “prescribes the gait problem to spondylosis.”

“That’s an incomplete characterization,” Siegel continued, stressing the importance of understanding why Biden is facing certain health issues. “What I want to know is, where’s the MRIs and where’s the EMGs?

“They did a thorough neurological exam, but they also need to do a nerve conduction EMG, and they need to do an MRI of the brain and the spinal cord to try and explain where this gait problem comes from,” Siegel said.

The physical claimed Biden was fit for duty. But there was one big thing that was missing from the physical — that was a cognitive test. So they didn’t answer the biggest question — the one that’s impacting his answers and the reason they’re trying to prevent him from answering. Siegel suggested they could have done tests that could have “ruled out” things associated with cognitive decline. But apparently, they didn’t — perhaps they feared what it might show?