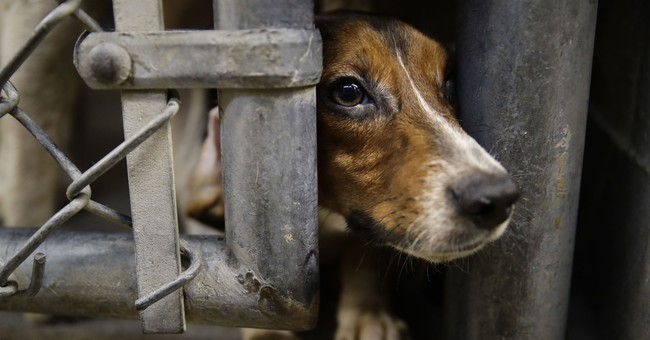 It is clear that in the rush to protect Saint Fauci, Washington Post forgot to actually investigate.

There has been no shortage of mantra-spouted bromides from the press during this pandemic. From mask orders to vaccine mandates, to lecturing against politicizing the virus to accepting shutdowns saved lives, it has been a tiresome litany of proven missteps. Two others have been mentioned possibly more than others, and on these, the journalists are most inflexible; we must always follow the science, and we must never question the words of Dr. Anthony Fauci.

Recently the deified physician has come under severe social fire when a story began circulating that he was the force behind some gruesome experiments involving a facility that used beagle puppies in bizarre setups. The stories were bad, but they were also supported with photos, and the content was shared in a viral fashion. It was reported that the foreign labs performing these ghastly practices had been supported financially by the medical organization headed by the famed doc.

Much of the onslaught stemmed from a viral and false claim that the agency Fauci leads, the National Institute of Allergy and Infectious Diseases, had funded a medical experiment in which beagles were trapped in mesh cages filled with diseased sand flies, according to four National Institutes of Health officials familiar with the calls.

Well, this kind of harsh public relations nightmare surrounding the favorite son of the media just could not be allowed, and thus the Washington Post rode in, to both correct the record and to lay blame where it was fitting. You see, it was those dastardly conservatives behind it all, and it was all a lie! Except, not really — and not really. There was a lot more behind this story, but the writers saved themselves a lot of time by only detailing half the story, in order to position their demons accordingly.

The push behind this, according to WaPo, was from a conservative animal rights organization. As surprising as this sounds it appears to be a thing. The group is called White Coat Waste Project, and it is described as being founded by a Republican operative, while the board and staff are fleshed out with GOP players. Then this dastardly outfit fed misinformation into the conservative echo chamber leading to the dire reaction that dared besmirch the holy name of Fauci.

The Post even interviewed Dr. Fauci, who commented on the effects he has felt as a result of this smear campaign. “The constant harassment in the form of ridiculous accusations and outright lies makes doing my job and that of my staff of fighting the covid-19 pandemic all the more difficult,” Fauci told the paper. Then he said something amazing. “This attack on me, which clearly has political overtones to a nonpolitical scientist, I feel, is dangerous to the entire field of science and [shows] how people try to intimidate scientists.” If you need a moment to recover from that, it is understandable. I need a moment, as well.

The Post goes into great detail about the White Coat Waste Project, as well as the founder, Anthony Bellotti. It does so to establish how this group is entirely Republican in construct, and as a result was uniquely adept at stirring up conservative outrage and unfair attacks on Dr. Fauci. However, although they allowed Fauci to call the charges lies, the paper stops short of saying so. This is for good reason.

Despite lengthy paragraphs spent positioning the group as a nefarious force, there was one brief revealing passage. It was shown that WCWP did not make up the story of the beagle experiments being funded by Fauci’s NIAID. It turns out there was an official announcement made by the research division in Tunisia stating that was the case.

The false claim about the funding for the beagle study, research that was conducted in Tunisia, originated with an error by scientists. Initially, the researchers mistakenly listed NIAID as a funder when they published a paper in a scientific journal in late July.

This means the WCWP announcement was based on a medical study from an officially released science publication, written by the science researchers who conducted the experiments themselves. They were following through with what the media has been lecturing for years — they followed the science and listened to trained medical professionals.

The story was only “debunked” by the same research lab after the public outcry and following a call to correct bt NIAID. It took NIAID two days to filter through its expenditures to determine that it had not funded the beagle experiments — although they say they do fund the same lab and group of scientists, with studies involving the sand fleas and beagles, but only in an experiment involving the safety of a vaccine, and the dogs administered with it are running free to see if they contract the transmitted disease.

If that sounds to you like a remarkably convenient explanation about the money trail, you are not alone. Fauci’s foundation only funds the experiments on dogs and sand fleas regarding a medication, but the funding ends there. The gruesome experiments by the same lab, same doctors, and on the same beagles regarding the same sand fleas must be underwritten by a different source. Sure.

Buried very deep in this Fauci rescue effort is this tiny toss-away nugget of information; PETA has repeated the false funding claim by White Coat Waste and said it, too, does not believe the journal’s correction.

That is all that is said of PETA. For some reason just as the People for the Ethical Treatment of Animals repeated the exact same attacks on Dr. Fauci and expresses the same level of doubt about the weak explanation offered up they do not come under fire from the Washington Post. Only the conservative organization is demonized and the ensuing social media outcry is characterized as an unfair assault on a venerated physician, based on a lie.

WaPo resorts to this base shoot-the-messenger routine, all in the effort to protect the good nature of Dr. Fauci. Reporting on half the story to do so makes this rescue mission all the more shallow.