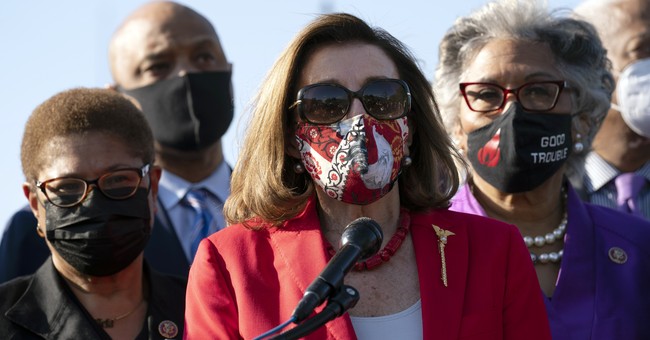 Republican infighting has taken center stage in the last week, with Rep. Liz Cheney (R-WY) facing the possibility of being ousted from leadership. As I explained previously, the reasons behind that stem from Cheney’s insistence on continually relitigating January 6th and her anti-Trumpism, instead of moving forward with the rest of our caucus towards a broader, more relevant message.

(Related: Liz Cheney Does Liz Cheney Things Again, and Her Colleagues Are Just About Done)

Of course, because everything must be absurd, we are now at the point of this saga where Nancy Pelosi praises Cheney as virtuous and courageous. If you had that on your card, collect your winnings at the window.

Now, I’m no expert, but I would think that if you are going to call someone courageous and patriotic, you should at least know their name, right? I mean, if you want to appear sincere at least. Pelosi pauses for several seconds and still can’t get it right. Lynne Cheney is Liz’s mother, but Pelosi doesn’t seem to know the difference between the two.

Part of this is the Speaker’s clear mental decline as an 80-something-year-old woman, but we all know the other part of it is that Pelosi isn’t actually being sincere. In fact, she’s so insincere that she didn’t even bother to refresh herself on the name of whom she’s attempting to address. Does anyone really think a rabid left-winger like Pelosi believes any Republican is patriotic? Lest we forget, former VP Dick Cheney was literally the devil to Democrats, and his daughter’s foreign policy is a carbon copy of the same Bush-era tripe that earned so much scorn.

No, this isn’t sincere. Rather, this is just an attempt by Pelosi to cause further division within the GOP caucus, and it’s yet more evidence that Cheney needs to continue her crusade outside of Republican leadership. When you’ve got Nancy Pelosi praising you in public, you are now officially a useful idiot.

Cheney’s response to all this recent “newfound respect” from the left tells the tale as well. She appears to be enjoying this and embracing her role as a creator of chaos within her own party. Is that what Republicans need from the person in the #3 position in House leadership? Or do they need someone who is going to reject the veiled mockery of the left and focus on actually winning 2022? I’d posit that the answer is the latter, and it’s not even close.

But hey, what do I know? Clearly, all the editorials from The Wall Street Journal and National Review ensuring me of Cheney’s virtue and usefulness have this all figured out.