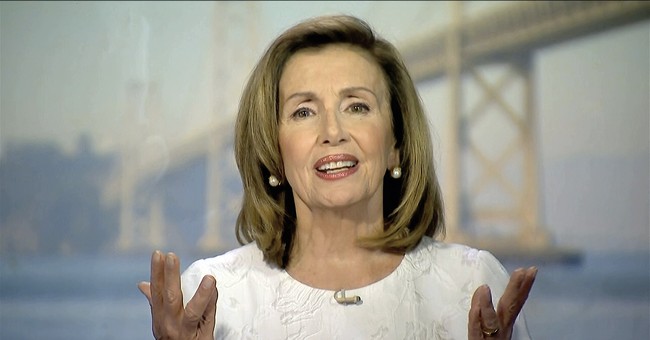 As a decades-long studier of all things House Speaker Nancy Pelosi, I can say without reservation that, in my not-always-humble opinion, no one on Capitol Hill in all my years of following politics has come anywhere near the level of unabashed religious exploitation as that of San Francisco’s “finest.”

We’re talking about a self-proclaimed “devout Catholic” — a claim for which she has been rebuked by the San Francisco Archbishop –who once referred to late-term abortion as “sacred ground.” Get the picture?

The bottom line is, like most “good” Democrats, Nancy Pelosi will stop at nothing — including the shameless exploitation of a faith she claims to cherish — solely for political expediency. There’s a special place in — oh, let’s not go there — I digress.

Anyway, now that Biden’s massive Build Back Better behemoth has been passed by the House, we continue to learn more details about the legislation that threatens to destroy America as we know it on multiple fronts, one of which is the notion of “climate change,” AKA: “global warming,” the left’s first favorite label for, um, weather cycles.

As reported by Just the News, we’re talking about $550 billion in “climate change” expenditures — and not a dollar too much, as Pelosi sees it. Nope, in Madam Speaker’s addled mind, it’s “a religious thing.”

“[W]e have a moral obligation to be good stewards” of God’s creation, Pelosi said.

“For me, it’s a religious thing. I believe this is God’s creation and we have a moral obligation to be good stewards. But if you don’t share that view, you must share the view that we have an obligation to future generations. So we’re very excited about what is in there and it is paid for.”

(You can watch her talk about it here — this quote comes about a minute in — but I wouldn’t recommend it. Your call.)

“Religious thing,” or not, did I mention that one of those things at which Pelosi won’t stop is bald-faced lying? Of course, the legislation is not paid for, regardless of how many times Joe Biden, Nancy Pelosi, and the Democrat Party continue to tell you it is.

I mean, you almost have to give these people credit for having the shameless tenacity to lie like this. As we have reported on several occasions, including earlier this month, multiple studies have found that the Democrats’ “costs zero dollars” claim is a complete crock of crap. The “paid for” Build Back Broke bill is projected to cost $4.79 trillion if its policies become permanent, as scored by the Committee for a Responsible Budget.

But, hey — when have liberals ever let a few pesky facts get in the way of a good political lie?

Finally, Pelosi also played the “children” card, another favorite tactic of the party of “sacred ground,” AKA: on-demand abortion.

“It’s about health care for our children, clean air, clean water, it’s about jobs, jobs, jobs; good-paying union jobs, to keep us preeminent in green technologies throughout the world.

Perhaps Nancy Pelosi was right in one religious respect of the Democrat attempt to transform America into a socialist state we would no longer recognize: