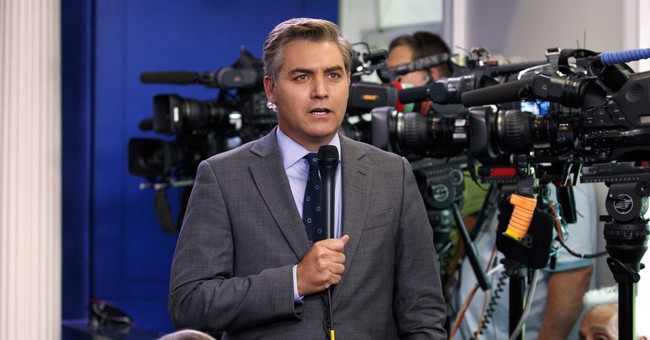 Case in point: I’ve lost track of how many times CNN’s intrepid former White House reporter has gotten his a** handed to him by Fox News and Texas Sen. Ted Cruz (R), but it’s a lot. Yet, he never learns.

As for Fox, it’s all about the ratings, Jim. End of story. And Cruz? Not exactly the guy you want to challenge to a mental gymnastics contest, my man. Simply put: battle of wits, no ammunition.

Yet, there he went again — and we love every minute of it.

As gleefully reported — although I have no idea why, given the fool Acosta made out of himself — by left-wing rag Raw Story, the CNN “journalist” on Friday repeatedly “called bulls**t” on Fox News hosts Tucker Carlson and Jesse Watters, Fox itself, and Cruz, a frequent Fox News guest.

Acosta was infantile from the outset.

“It’s that time of the year, the days are getting shorter, it’s cold outside — it’s also when we start looking back at the past year.

And what a year it was over on Fox — or, as I’ve described it this year, the bulls**t factory. [How cute, bless your jealous little heart.] Just in the last week, they’ve churned out so much BS it’s hard to keep up.” [Oh, ha.]

Acosta, who has always fancied his silly self as some kind of modern-day Edward R. Murrow or Walter Cronkite, got his typical Barney vibe on, all proud of himself for saying “bulls**t” on the air — particularly about Fox News. Almost like he wet his pants a little bit, each time he said “the naughty word.”

“Honored”? Says who? Post-Trump, CNN’s ratings have raced down the ratings toilet faster than Michael Moore running from a door-to-door health food salesman. Now that Corn Pop’s pal sits in the Oval Office, CNN’s only reason for existence has been to desperately try to save this guy from himself — to no avail.

Acosta eventually turned to Cruz, suggesting the Texan could’ve been a candidate for CNN’s silly “bulls**t factory employee of the month” award if he were a Fox employee instead of an “aspiring” employee.

Here’s how that went:

“Ted Cruz — he could have been a contender with his recent criticism of Big Bird — and his accusation that Liz Cheney suffers from Trump Derangement Syndrome.” [Um, Jim?]

CNN then rolled a clip of Cruz saying:

“I look at the situation of Liz Cheney and I just think it’s sad. I think she falls into the category of people who Donald Trump just broke. Just shattered — she’s lashing out at Trump, at Republicans, at everything. She’s become a Democrat and it’s sad to watch what has happened. It is Trump Derangement Syndrome.”

As to Big Bird, as we reported earlier this month after the bird-turned-COVID-vax-advocate showed up on CNN to shill for the vaccine, Cruz promptly labeled the PBS taxpayer-funded kid show’s sales job: “Government propaganda… for your five-year-old!”

There is a reason that CNN has no viewers.

It is not remotely a news organization. It’s just angry, dishonest, partisan propagandists.

Can you imagine Walter Cronkite doing this?

But that’s ok: 6X as many people will see this tweet as watch his show!

Mic drop, right? Not yet.

Who cares? Acosta’s rant so imbecilic & juvenile, it doesn’t matter how many people watch it. The more the better–it unmasks & beclowns CNN, simultaneously.

Finally, this last bit of stage 4 Trump Derangement Syndrome insanity from our Jimbo:

“Fox News can’t run away from Trump or Trumpism. Fox is Trump, and Trump is Fox.”

Earth to Jim: Fox News kicks CNN’s a** every day of the week and twice on Sunday. And nobody knows whether or not you’re even still on the air, much less when. Why the h*ll would Fox News want to run away from anything? Least of which, you and CNN?

Speaking of clueless non-competitors of Fox News, check out the latest on MSNBC’s race-hustler extraordinaire, Joy Reid for a few laughs: