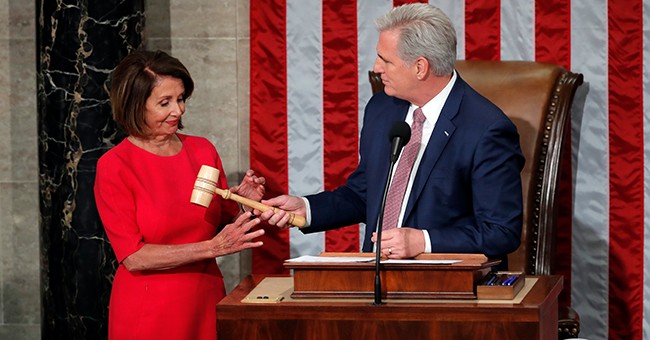 Last night, House minority leader Kevin McCarthy set a record. He took to the House floor to protest the incredibly reckless and profligate “Build Back Better” boondoggle at 8:38 p.m. on Thursday and finished at 5:11 a.m. today. He held the House floor for eight hours and 33 minutes, surpassing Nancy Pelosi’s record speech of 8:07, which she used to hawk an amnesty program for illegals.

The Democrats passed the bill after McCarthy dropped over from exhaustion.

The Minority Leader was undoubtedly correct in his critique.

The Biden bill is guaranteed to bankrupt the nation while it sets about federalizing child care and making a mockery of immigration law. But, on the other hand, the IRS will get increased funding because it is tasked with finding the money to pay for it all.

While I have the deepest respect for my colleague Jennifer O’Connell (see Kevin McCarthy Is Leaving It All on the Field – or Floor – Fighting Biden’s ‘Build Back Better’), my view is that all this does is serve as a fitting metaphor for McCarthy’s term as minority leader: style-over-substance and ineffectual.

I’d be the last guy to claim that being minority leader in the House is an easy job. It’s not. What we’ve seen from McCarthy since Joe Biden was selected to be president is not the leadership required to resist an administration and House majority hellbent on rendering the US Constitution irrelevant. We can go back to his coddling of Liz Cheney’s actions during the bogus “impeachment” of President Trump. Under McCarthy’s leadership, Biden’s infrastructure bill passed on the strength of GOP cross-over votes.

Biden’s $1.2 trillion infrastructure bill passed late Friday night and is headed for his signature after months of intense wrangling over the details — particularly whether it would be tied to a larger spending plan that progressives insisted upon passing alongside it. But in the end it wasn’t really those progressives who provided the key votes, but rather the 13 Republicans (the full list is at the bottom of this post). The final vote count was 228 to 206, meaning if no Republicans had voted for the bill, it wouldn’t have passed.

This is not how the leader of a beleaguered minority party acts.

McCarthy has also failed to protect his members from being singled out for retaliation by the Democrats. Two days ago, Paul Gosar was stripped of his committee assignments because AOC got her knickers all wadded up over a silly and nearly incomprehensible take-off of an anime cartoon. Marjorie Taylor Greene suffered the same treatment because her opinions were not in line with “right thinking” members of the media and the Democrat majority. This is not to say that McCarthy could have prevented the Democrats from collecting scalps, but he didn’t bother to try to extract any kind of a price. His flaccid and disinterested reactions are not what is required of a “wartime consigliere.”

Let’s speak frankly about what is going on here. Like most sane people, Kevin McCarthy expects the GOP to take control of the House of Representatives in January 2023. So he wants to be Speaker. He’s done nothing “Speaker-worthy” as the minority leader, but he’s also aware that he’s not offensive to most of his caucus. So all he has to do to grasp the gavel is to give the appearance of being active.

Kevin McCarthy is part of the problem, not part of the solution. If he becomes Speaker, he’s going to do nothing to bring the Democrat mob to heel. He’s going to do nothing to inflict payback for their targeting Taylor Greene and Gosar to ensure such crap never happens again; see Marjorie Taylor Greene, Paul Gosar, 2022, and the Chicago Way. He is a go-along-to-get-along type who will sell out his caucus in a minute to curry favor with the Democrats.

McCarthy may very well end up as Speaker, and there might be valid reasons for installing him as such, but don’t fall for the bullsh** being slung by the House GOP that Kevin McCarthy cares enough about anything to fight for it other than his career.