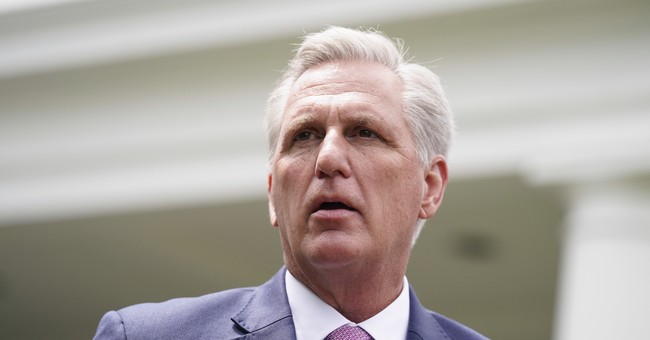 As the expression goes, it appears that House Minority Leader Kevin McCarthy is leaving it all on the floor. Literally, the floor of the House of Representatives.

As of 11:00 p.m. EST, in the House version of a filibuster, Leader McCarthy is still at the microphone, speaking against Biden’s $5 trillion “Build Back Better” boondoggle.

Leader McCarthy announced he would be exposing what was in the bill several hours before.

And almost two hours later, McCarthy is still calling out the pitfalls of the bill.

But McCarthy is also speaking about past Republican presidents, and the people and events that built America, that made it great, and that changed the course of our history for the better. People and events that represented freedom, and how this gigantic piece of legislation is the antithesis of it.

Many conservatives and Republicans felt it was a dereliction of duty that Leader McCarthy could not prevent 13 Republicans from siding with Speaker Nancy Pelosi to vote on the $550 billion “bipartisan” infrastructure bill. Had these Republicans not jumped ship, the bill would have had a good chance of dying on the floor.

After that embarrassing defection by his caucus, it appears McCarthy has found the fire in the belly. According to NBC News, House Speaker Nancy Pelosi is fact-checking him (we’re defining “fact-checking” in Associated Press terms here) in real-time for the portions of the bill he is condemning.

Most of the Democrat House has taken to Twitter to joke, malign, and condemn McCarthy for his actions. Other legacy media is live tweeting, capturing some of McCarthy’s statements on past Republican presidents, like Abraham Lincoln:

Not sure how long McCarthy will last, or if his speech will move any hearts or minds among the more moderate Democrats (do they really exist?) to kill the bill, but he certainly has chosen to make Biden’s signature legislation all about him, which significantly diminishes its weight–if not its price tag.