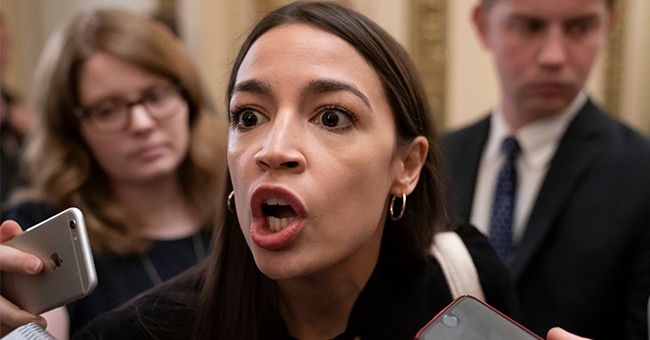 The 19th-century humorist Josh Billings observed: “It ain’t ignorance [that] causes so much trouble; it’s folks knowing so much that ain’t so.” Nearly 100 years later, President Ronald Reagan recycled the observation: “The trouble with our liberal friends is not that they’re ignorant; it’s just that they know so much that isn’t so.”

In the case of Rep. Alexandria Ocasio-Cortez (D-N.Y.), I’m not sure about the “ignorant” part (wink-wink), but examples abound that lead one to wonder about it — and boy, does she have the “know so much that isn’t so” part down pat.

Case in point: the noted fossil fuel expert’s latest silly comments about the evil Keystone XL pipeline — gleefully killed by Biden a nanosecond after his occupation of the Oval Office.

In an Instagram video on Sunday, the erstwhile bartender mistakenly asserted that the Keystone XL Pipeline and Line 3 Projects were proposed to increase U.S. natural gas exports. Yeah, no. The two pipelines were proposed to transport crude oil, not natural gas, from Canada to the U.S. as an import.

The Keystone XL pipeline spur was proposed as an extension to an already existing line that stretches from North Dakota to Texas. Canada’s Line 3 pipeline has transported crude oil into the U.S. through Minnesota since the 1960s. A $2.9 billion Line 3 replacement currently under construction continues to face stiff opposition from environmental wackos — one of whom is the intrepid AOC.

“Line 3 should not exist,” declared the energy expert.

The misleading — wrong — video garnered more than 180,000 views, a scary thought in and of itself.

“When you look at Keystone XL, and when you look at a lot of these other pipelines, people say, ‘Oh, this is for energy, you know, independence in the United States. We actually already produce enough to power our own country, whether you agree with it or not.”

Donald Trump made the same claim. Is it true? In a word, no — in terms of production and domestic consumption, which is how most people view energy independence. But, according to Forbes, U.S. oil and natural gas production currently represents roughly 68 percent of U.S. energy consumption.

When people see our net exports are positive, it is viewed as “energy independence.” When they turn negative, we are once again partially dependent. (In reality, we are always partially dependent, because even when our exports exceed our imports, we are still importing oil from other countries).

But, hey — at least Trump knows the Keystone XL Pipeline was designed to carry crude oil, so there’s that.

Incidentally, speaking of Democrat economic geniuses, as RedState reported on Wednesday, Steven Rattner, a former economic adviser to President Barack Obama, wrote an essay for the New York Times in which he said he and other economists warned Biden and the Democrats about inflation to no avail.

“How could an administration … have gotten this critical issue so wrong?” asked Rattner.

Should we tell him?