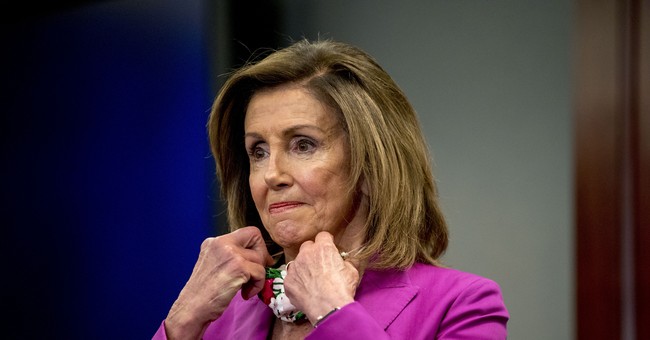 Ahhhhh good ole Speaker Pelosi, a fixture in Washington D.C. since the Reagan administration, is about to term limit herself out.

Yes, folks, it is happening.

Now before I continue on, let me add the standard disclaimer about how the GOP could somehow screw something up between now and this time next year. I’m from Michigan and the state GOP’ers here are simply masters at messing up a damn near sure thing.

However, the one thing going for Republicans this time that the Democrats will not be able to overcome is: Joe Biden.

The last two times there were large red waves back in 1994 and 2010, you had Presidents of the donkey party that were new and a bit wet behind the ears. Leading up to next November’s election, we have an old codger who is wet everywhere other than the ears occupying the Oval Office and is spewing verbal diarrhea on a weekly basis. I simply do not see how the Grand Old Party could screw this up, even though they may try.

This brings us to the Representative from California, Speaker Nancy Pelosi.

An article by my colleague Nick Arama yesterday here at Red State spelled out some of the reasons why Nancy is looking for the exit. Poll Showing Historic Lead by GOP Signals Huge Red Wave Ahead…

The latest Rasmussen Reports survey just out said likely voters favor Republicans over Democrats by 13 points, 51%-38%. The survey found that Democrats are only favored over Republicans among younger voters, black people, Democrats, and liberals.

However, there is a huge 20-point gap among independents who would choose a generic Republican over a generic Democrat by a margin of 48%-26%.

While the questioning is a bit different in the new Rasmussen survey than in past years, the gap is apparently historic and even stronger because the latest survey offered the alternatives of “some other candidate” and “not sure,” said the polling outfit.

A twenty-point margin of independents for Republicans?

In short, those numbers are pretty bad for Nancy and her crew.

Most longtime elected officials generally like to call their own shot of when they get to exit the arena. Of course, not all of them get to for a number of reasons, but the smart ones do. That is why Nancy — even before these numbers above were published — was inching towards the exit.

When Pelosi and the Dems were able to retake the House in the 2018 midterms, that should have been a crowning achievement for her personally but she was immediately attacked by brand new members of her caucus-like A.O.C. plus three. These brash newcomers had not even found where the bathrooms were yet on Capitol Hill and they were challenging Nancy in her role as leader.

Pelosi has constantly been fighting with the youngsters in her party who think everything should be done via Twitter and not through negotiation. That Pelosi and the Democrats LOST SEATS last year in the House is not of any concern to AOC and her merry band of Marxist harpies; they just want to sound smart on Tik Tok. This creates a problem for the Speaker and why she allowed official Washington to know that she cut a deal to get the kids off her porch for one more caucus election after the November 2020 election.

With the current President’s policies tanking his approval ratings and the historical trend of the party in the White House losing seats in the midterm election, Nancy Pelosi hears Father Time and the Political Reaper whispers.

These latest poll numbers just confirm the inevitable and with the announcement of longtime political hacks like Pelosi buddy Rep. Jackie Spier and Sen. Patrick Leahy both calling it quits before next year, the writing is on the wall for Madame Speaker. All she has to do now is announce that she is toast and leaving her seat that she has held since 1987.

Hopefully, Nancy makes this announcement soon that she is retiring and we can get photos of that awkward moment where AOC and Pelosi nod at each other as the torch is passed from the loons on the left to the loonier on the far left. I’m sure that the Progressive kids will love being in the minority in the House and might one day realize that Pelosi was old and cranky but not actually the problem they had.

For some reason, I can already hear Nancy getting the last laugh.