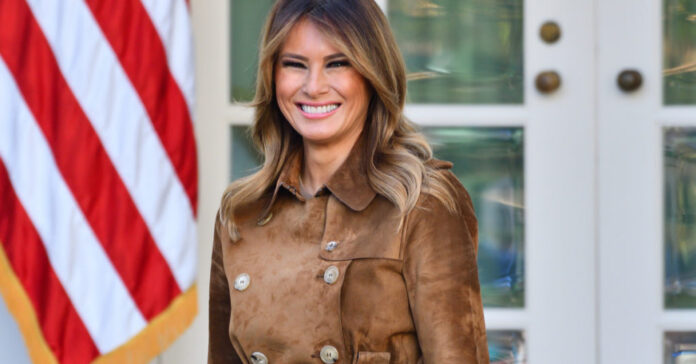 Winning the presidency isn’t just a job for four years, and it’s not even just for you. The First Family is just that, they’re a family unit that is meant to stand up for, take up for, and believe in the American people, and not just show they’re in office. The First Family continues to show up at events, make comments at important events, and be part of the American experience for as long as they live. Once they are part of that elite club, they’re always part of the club.

So it makes sense that the former president and his wife, Donald and Melania Trump, haven’t taken a back seat to issues that are important to the American people. While the former president has relegated his comments largely to ongoing issues of public policy, the former First Lady Melania Trump has continued to do the kinds of things that many first ladies enjoy, such as showing gratitude to the former members of the military on Veterans Day.

According to a report in the Independent Journal Review, former First Lady Melania Trump was quick to honor veterans on Veterans Day saying that they “bravely answered the call,” and that we owe them a debt of gratitude. The former occupant of 1600 Pennsylvania Ave took to social media to post a video of a flag with the caption, “This [Veterans Day], we pause to recognize the selfless men and women who have fearlessly protected our Nation’s freedoms. They bravely answered the call to serve and have earned the respect that comes with defending our great flag.”

The former president was not remiss in skipping out on the holiday either, posting a video of his own, offering his thanks to the armed forces that he was formerly the commander in chief of, saying, “On this Veterans Day, I’d like to pay tribute to all of those incredible people, and you are indeed incredible people, who serve so well, and so strong, and so powerfully in the United States Armed Forces,” the former president said. “We love you. Our nation respects you. The world respects you and we will come back. Our country has gone through a lot. The last period has been very, very tough, watching what you had to watch but our country will be back and will be back stronger than ever. Happy Veterans Day.”

Are these statements significant ones? Well, yes and no. Up until the Obama administration, each and every person had their version of respect for the armed forces. Some more than others, but in general, there was at least a firm show of support for the military, even if there wasn’t such a push for funding and support. But with the advent of the Obama administration, there was a distinct falling away from what the American people have traditionally expected from their chief military officer. Trump brought back the respect and appreciation, but the falling away was even sharper with the Biden administration, and President Joe Biden himself is a great reminder of why a career politician is so difficult to trust in that position of power.

Yes, the current president and First Lady posted about Veterans Day, as did Vice President Kamala Harris. However, the growing understanding of what they plan to do with their power, and the muted tone taken to speak to those risking their lives for this way of life is a reminder of why so many military families vote red instead of blue.

“On [Veterans Day], we honor those who have served. Our hearts are with you and your families today and always,” First Lady Jill Biden tweeted. Ahh, insincerity at its best.

Vice President Kamala Harris wrote, “On Veterans Day and every day, we honor those who have served our nation in uniform. It is their courage, sacrifice, and commitment to the values and principles we hold dear that allow us to live in a safer nation.”

President Joe Biden noted, “Less than 1% of Americans currently serve in our military and while we can never fully repay the debt we owe these heroes, it is our sacred obligation to properly care for and support them. This Veterans Day, we honor all those who have answered the call to serve.”