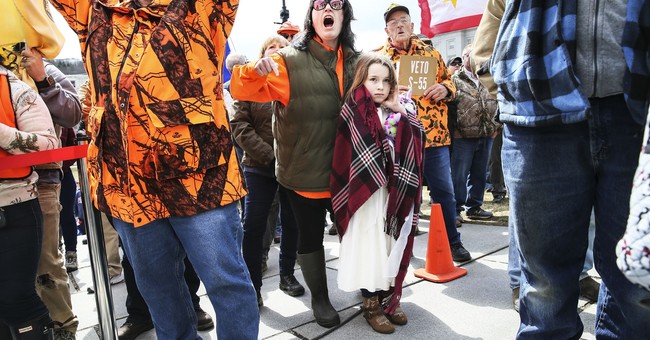 As the Great Vax War continues with no end in sight, “the science” long ago gave way to political expediency and hyper-biased predisposition. In other words, as the data continues to roll in, a great deal of it flies in the face of Joe Biden and the Democrat Party. Let us begin with the weird state of Vermont.

Apologies to conservative Vermonters, wherever you are.

As RedState reported earlier this month, Vermont was the most-vaccinated state in America, clocking in at 71.5 percent of the total population, edging out Rhode Island at 71.2 percent and Connecticut at 70.9 percent. Vermont’s lock on the top spot hasn’t changed, as reported by ABC News on Friday, with a current COVID vaccination rate of almost 72 percent.

What has changed in the “model for the country” is a “significant” surge in COVID cases this past week.

Mike Pieciak, Commissioner of the Vermont Department of Financial Regulation, said during a press briefing on Tuesday: “We just haven’t [previously] seen an increase in terms of that raw number of cases during the pandemic,” adding that there were more than 2,100 cases reported for the week — in one of the least-populated states in the country.

The seven-day average for Vermont COVID cases rose 42 percent as of Tuesday, according to state data. Vermont does more testing than nearly every other state, noted ABC News, though testing only increased nine percent during the same period. According to state officials, the statewide positivity rate also increased 30 percent, with the seven-day average positivity rate just under four percent.

Hmmm. This presents quite a problem. A bit of a sticky wicket, as ‘they” say. Not for the COVID patients; I’m talking about the Democrat Party and its COVID narrative. Now what?

There’s no “one simple answer” behind the surge, according to Dr. Mark Levine, Vermont’s health commissioner. Although, as duly noted by ABC News, the Democrats do cling to their hole card, ready to be played without a moment’s notice — the apparently ubiquitous delta variant.

The delta surge in Vermont mirrors rising cases in the region, as northern parts of the country that were largely spared over the summer are now seeing increases during colder weather.

Vermont is one of 22 states, many of them with colder temperatures, that has seen an uptick in daily cases of 10% or more in the last two weeks, according to an analysis of CDC and Health and Human Services data.

“Across the United States and in Vermont, we’re seeing the impact of the highly contagious delta variant. It really is so contagious, it seeks out pretty much every unvaccinated person.”

How does that explain the surge in Vermont? I’m not an “emerging and infectious diseases” expert — hell, I’m not even Anthony Fauci — but given that Vermont has the highest vaccination rate in the country, wouldn’t the good doctor’s explanation suggest that states with lower vaccination rates would, theoretically, fall victim to delta surge rates greater than those of Bernie’s state?

Levine then dug her hole even deeper.

Vermont might also be a “victim of our success,” she said on Tuesday, pointing to a lack of natural COVID-19 immunity among unvaccinated residents “because we kept the virus at such low levels throughout the entire pandemic.”

Vermont has one of the lowest levels nationwide of residents who have developed natural immunity to the virus, noted ABC News, which, I presume is the “fault” of Vermont having the highest percentage of vaccinated residents in the country. Yet, both vaccinated and unvaccinated Vermonters are clipping along at the highest rate of new COVID cases in America. Yup, sounds perfectly legit.

Levine also speculated that COVID immunity may be “waning” among Vermonters who were “efficiently and effectively” vaccinated early on, likely contributing to the rising number of cases. Breakthrough cases among vaccinated residents are up 31% over the past week, according to state data.

You see what they continue to do, right? “Incremental full and fair disclosure,” I call it. They are setting us up for COVID boosters for the rest of our lives, America — until the end of time. As RedState reported in late October, even The Washington Post finally admitted that we will “never” be “fully vaccinated.”

Speaking of the end of time, COVID is going to be around for that long, as well. Smallpox remains the only eradicated infectious human disease for a reason. Unlike other deadly infectious diseases, there remains no evidence that smallpox can live in animal hosts. COVID can.

Meanwhile, COVID ankle-biters like Anthony Fauci, Joe Biden, and Nancy Pelosi are going to continue to hype the ever-loving crap out of the virus at every opportunity, most of which are self-created.

Yo — RedStaters. Not to be a pimp, here, but there are just two days left to hop aboard the RedState VIP Express at 40 percent off the regular subscription price. Check it out:

To get exclusives and the latest news that matters to you, use promo code 2022 this week only for a 40 percent discount on your new RedState VIP subscription. It is the largest discount we have ever offered. Make sure you have the news you need.