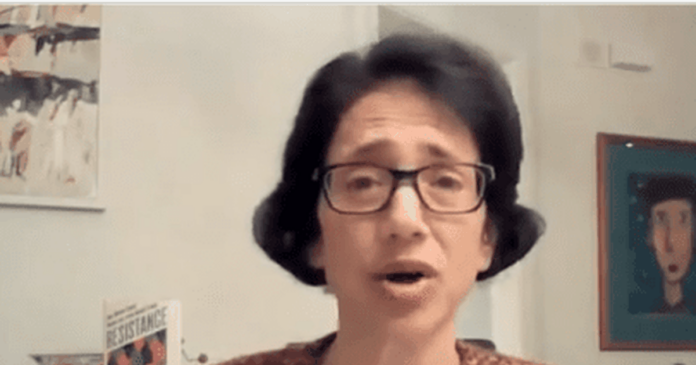 While we see media going to all kinds of Orwellian lengths to defend the failures of Joe Biden, the opposite side of the coin is how much media will spin reality to attack Republicans.

Now, we’ve seen bias when it comes to media. But the Washington Post’s Jen Rubin exceeds bias and moves right into outright lunacy with this mad rant at Republicans.

First, she falsely claims that the Republican Party has been endorsing violence. But then she gets to the meat of what she wants to say — that the media has to have “rules” for how they treat Republicans. Now, I will give you a “Jen Rubin” warning going in. You’ve been warned.

“You have to have new ground rules for the media,” Rubin whines. “They have to stop treating Republicans like normal politicians. They are not normal politicians … This is a party that spends its entire time cooking up ridiculous culture memes & fanning violence & coming up with outright lies.” Then the MSNBC host completely endorses the crazy idea, shaking her head ‘yes’ and telling Rubin she’s completely right.

Rubin is not living in reality. Notice she even includes as somehow offensive that Republicans dare to defend parents who are being targeted by the DOJ. The Biden Administration is just concerned about violence, Rubin claims, although the DOJ and Attorney General Merrick Garland can’t seem to present data supporting that there is violence justifying their intervention.

Has Rubin been missing for the last few years, as Democrats like Rep. Maxine Waters (D-CA) have encouraged violence against Republican officials?

>Was she paying attention when Republicans were harassed and attacked because Democrats demonized them in the fight over healthcare, and the GOP baseball practice was shot up by a Bernie bro? Did she miss the radical leftist attacks on our society over the past two years that were downplayed by the media and Democrats? Did she notice the DNC endorsing BLM at their virtual convention last summer, or Kamala Harris and Biden staffers contributing to a fund to bail out people during the rioting? Yes, let’s really talk about who is behind violence here.

Beyond that, when did you ever think that you’d have an alleged journalist wanting to come down in favor of restrictions on speech? And while she’s talking about “fascism,” does she get that imposing rules to limit the speech of the ruling party smacks a lot like creeping fascism? But she’s saying that quiet part out loud — the thing that media would like to do — not allow the dissident opponents to speak.

How does she think Americans will view this take? And it’s not just her take — it’s the MSNBC host completely agreeing with the idea. Do we really want to talk about who is upending norms here? Democrats and media would not fair well in that analysis.