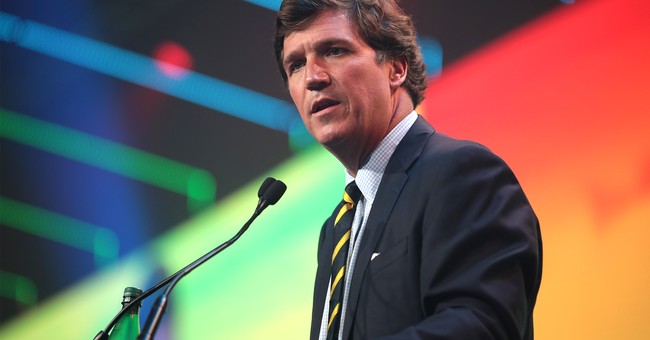 Last week, Bonchie reported on the predictable meltdowns that occurred after Tucker Carlson facetiously suggested law enforcement be called on a parent if their child was seen wearing a mask outdoors.

As Bonch opined, it was unlikely Carlson actually wanted people to turn into mask Karens, especially after the numerous mask/no-mask confrontations that happened last year where police officers ultimately got involved. “Does he really want you to go call the cops on someone for wearing a mask outside? Probably not, but using absurdity to mock one’s opponents is a common rhetorical technique. ”

Regardless, it sent the Usual Suspects on the left and in the media on a righteous tear, with the Washington Post media critic Erik Wemple doing his patriotic duty by calling child protective services locations in numerous states (see thread here, it has not been updated in several days) to check if anyone had reported a parent in response to Carlson’s commentary.

As it turns out, Wemple and other Carlson-obsessed media figures like CNN’s Brian Stelter and Daily Beast’s Justin Baragona weren’t the only ones hoping to be able to pin a post-commentary incident on the popular Fox News host. It seems CBS News New York reporter Nick Caloway wanted to get in on the action, too.

Check out the two tweets he posted last night – the first one being a short video of Carlson’s segment last week on masks and the second one being about an assault on a woman in New York that took place on Sunday:

Caloway’s tweets didn’t stay up long, however. A short time after he posted them, they were quietly deleted and without explanation. But not before a few people got a chance to comment on them. Here were some of the responses:

I’m not sure if the female attacker was homeless or not, but my guess is that the reason why the tweets were deleted was because the video showed the wrong narrative: what appears to be a black woman attacking an Asian woman in Hell’s Kitchen, which has been a hotbed of anti-Asian attacks in recent weeks. Here’s a different video clip than the one shown by Caloway:

The attacker reportedly demanded the victim remove the mask she was wearing before the attack.

I asked Caloway on Twitter last night why he deleted the tweets after initially trying to make a correlation, without evidence, between the attack and Carlson’s commentary, but as of this writing he has not responded:

A diverse range of people watch Carlson’s program, so it’s not good to assume someone doesn’t watch based on looks, but my gut feeling here is that the attacker in these videos possessed motivations that had nothing whatsoever to do with what Tucker Carlson had to say last week, hateful motivations that were probably very much in line with some of the other vicious attacks we’ve seen against Asian-Americans in the greater New York City area recently.

We’ll keep you posted in the event Caloway provides an answer.