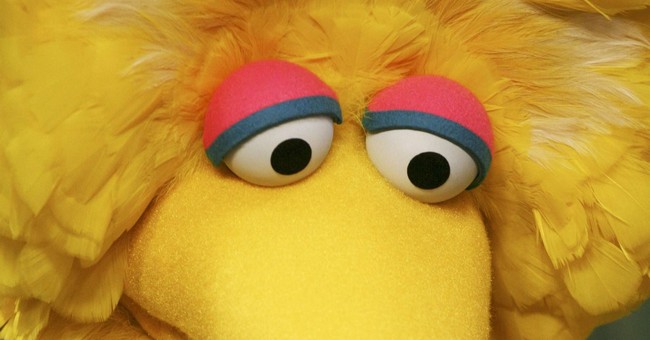 Note the difference in the messaging from the press the moment a Republican takes a stand.

Ted Cruz has set off the press this week by daring to stake out a contradictory position from — Big Bird. That such a debate between politicians and a fake character becomes reality is one thing, but the media taking up sides with said character in defiance of their own lectures makes things all the more ridiculous, but then when the President of the United States engages in a public conversation with said bird makes things surreal.

This all began when a bid to convince children to get the newly approved vaccine was encouraged by the famed Sesame Street character. A tweet was sent out where Big Bird stated he had actually received the shot. This in itself is hardly a big deal, as he has in the past touted vaccines on the children’s show.

Things take a turn, however, when this gets shot through the prism of our political climate. Ted Cruz weighed in on the tweet, making mention of the government looking to coerce. In his response, he said, with a noted amount of brevity, “Government propaganda…for your 5 year old.” Well, that was all it took for a media firestorm to erupt, as our unbiased gatekeepers of the truth rose up en masse to defend the high honor of…a make-believe character.

All across the media spectrum, those from MSNBC and The Lincoln Project, from Vox to Stephen Colbert, and Hollywood celebrities got in on the condescension. So many in the media thought they were dunking on the Texas senator with their wry retorts, but they managed to forget a key detail in their rush to out-snark each other and high-five digitally — they just voided most of their own COVID outrage from the previous 18 months.

Consider all the lectures we have been enduring, braying loudly at anyone who dares wander off of the rigid narrative reservation and begins to ask questions or look at studies that deliver unapproved data. The only accepted source for pandemic details was trained medical professionals, and even this was a limiting criterium because any physicians who dared deviate from the script were banished as medical heretics. So for months now, any and all possibly questionable commentary was rebutted with the mantra — follow the science and only listen to accepted medical experts.

Now, today, a seven-foot-tall feathered puppet with a first-grade vocabulary is an acceptable source of epidemiology. In just the past weeks, the same press lost their minds when podcaster Joe Rogan, and quarterback Aaron Rodgers, lent their opinions on COVID treatments — but today, a hallucinogenic from a fever dream is an unquestionable source of viral knowledge. How about the very fact that a fictional character declaring they received the shot is not considered misinformation?

Just add this to the ever-growing list of contradictions from our media betters.

Meanwhile, the perpetual source of merriment — all while never being a credible source, period — Chris Cillizza joined in the fray, and he came out of it about as well as a Sesame Street audience member who wanted to play football with his high school brother. Chris delivered a video episode of his cast The Point, and in trademark fashion, he managed to miss his show’s title.

Cillizza went after Ted Cruz, spending over four minutes railing about his seven-word tweet, to give you a sense of balance. Chris was very energized to defend the good honor of the PBS medical expert, and in so doing, completely stepped on a rake, then proceeded to use it as a pogo stick. This is because Cillizza had previously had similar outrage at Aaron Rodgers, and this is where things get hilarious.

This past weekend, he had harsh words for the football star who he referred to as a “Jerk” at one point. Rodgers has become embroiled in vaccine controversy for testing positive after refusing the shot, and Cillizza was mocking Rodgers for saying that he had done his own research into the matter.

And here is where it gets really good. During his video in defense of Big Bird, Cillizza makes a diversion to look at some COVID data, and then stares into the camera as he says — I kid you not — “Do the research.” You just have to love the inability of the journalists to keep their own narratives straight, as they become emotionally tied up in leaping at their opposition.

Just keep these details in your back pocket going forward. Next time we are scolded over medical details all we need to say in response is, “Hey, I am just waiting to hear what Big Bird has to say on the matter before I make such a serious decision.”

This week Townhall is running a great special on VIP memberships to help us ensure we can continue to report on the power brokers and insulate us from the threats of being silenced by the very entities engaged in the grifting.

Right now there are big savings available as we prepare for the coming midterm election season. Go to this link and input the savings code – 2022 – and your VIP gold membership will get you access to the select content on ALL the townhall websites.