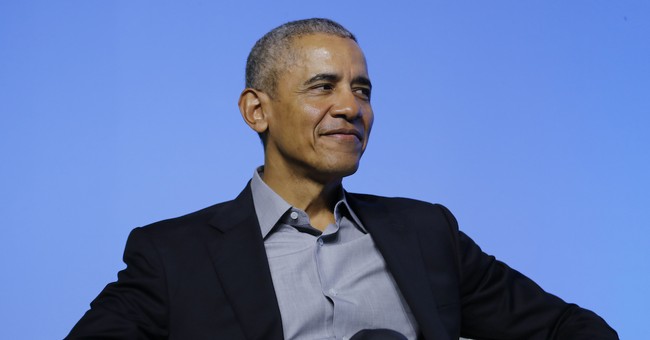 When President Barack Obama spoke last week at the COP 26 Climate Summit he made a statement I don’t think he meant to make. But in making that statement he proved everything we already know about, first, the climate change argument, and second, liberal hypocrisy. Before we get to what exactly that statement was, we have to remember what school of thought the former President is from.

It seems everything with liberalism is about two things: force and, as a direct result, hypocrisy. Whether it is taxes, speech, or any of the other 100 different ways it seeks to control your life, the inherent requirement for the left’s enforcement mechanism of their grandiose ideological quest is always force. Don’t pay your taxes? Force. Don’t want to buy an electric car? Force. Don’t want to believe that a man can become a woman? Force. And as we have been seeing more recently, decide you don’t want to get vaccinated? Force.

Over the last couple of years liberalism, which was already a threat to our republic, was spliced with viral progressivism, creating a new chimeric ideological pandemic that has wrought havoc on our country, spreading the false belief that the answer to the myriad of problems created by the government is in fact, more government. When socialistic practices lead to predictable and inevitable disasters, the answer is more socialism. If you look at the inner-city areas of Los Angeles, San Francisco, Seattle, Chicago, or New York, you find a laundry list of issues, from homelessness to rampant crime to cold-blooded murder, almost exclusively attributable to a liberal-socialist policy that has been codified into law. And what does the progressive-left say is the answer? Whaddya know! More Government. More Socialism.

This brings us back to the statements made by the Former President on Monday at COP 26 Climate Summit in Scotland. As always, Obama started with some pandering nonsense which led him to commit what is, to my people, a grievous cardinal sin:

“Since we’re in the Emerald Isles here, let me quote the bard, William Shakespeare, ‘What wound,’ he writes, ‘did ever heal but by degrees.'”

Yes, while the President spoke in Scotland, he suggested they were in Ireland and quoted an Englishman. As a representative of the Tribe of Wypipo, I take offense. Had Donald Trump made this same comment, the press would have laughed at him for weeks. Had Donald Trump made the same mistake with Honduras, Guatemala, and Gabriel Iglesias, the press would have labeled him a racist.

But it is what Obama said later that got my attention. In discussing how to approach “equity” in climate policy, Obama had to say this:

“I can afford to give up a lot of my current lifestyle to benefit the planet because I’ll still have a lot left over. A lot of folks don’t have that cushion. So that means that any climate plan worth salt has to take these inequities into account.”

That leaves me with just one question: What the hell is stopping you?

If you think that climate change is as big of a threat as you constantly lecture us that it is, why don’t you just volunteer to make the changes in your life to combat it? What about implementing that change requires government action? Here I sit, in my home with a solar reflective roof, heated and cooled by the highest efficiency of HVAC systems (through new R8 ducting), powered 100% by solar, driving an electric car that is charged by – you guessed it – solar power, and using only energy-efficient appliances, and you have the stones to demand government regulate me, while you’re admittedly able to do more on your own – without the government using force?

Not only does Obama state that he can give up more; he states that even if he does he will still have a lot “left over.” And why? If, again, climate change was such a grave threat to our existence, and immediate action is necessary, why would you only give up some? Why would you not give it all up? Why wouldn’t you take the totality of the action available to you, with as much immediacy of which you were capable, to combat climate change? And why is it that Obama thinks he can state so openly and plainly that he just isn’t doing anything and is waiting for others to tell him what to do when he is there, demanding action? Would not the sentence, “I have given everything up to help contribute to climate change goals,” or even “Here is the immediate action I am taking to help combat climate change,” serve his agenda better than, “Welp, someone hasn’t made me do anything yet.” Is the left’s only motivation for an action done so at the end of a barrel of a gun?

[As an aside, for someone who is extremely worried about climate change and the resulting rises in ocean levels, it certainly didn’t stop Obama from buying an oceanfront, 11 Million Dollar, 6900 square foot home in 2019. With the climate emergency ahead of us as imminent as we are told, it should be underwater any day now.]

Sure, we’ve covered that they can only execute their agenda by force, but there was that second part of the basis for all liberal ideology: Hypocrisy. When you think about every single benchmark of liberalism, it always has to start with force and always results in exposing hypocrisy. Think about it. Let’s take taxes for instance. Many liberal billionaires have stated that they can pay more in taxes. Many wealthy Democrat politicians say they want to pay more. Well, then do it. Do they think the government wouldn’t accept it? Are there any laws on the books that state that they cannot open up their checkbooks and write a check to the US Treasury? No? So is it safe to assume that the only reason they haven’t is that they haven’t been forced to? What do you bet every single one of them takes all of the maximum deductions and write-offs every year? Force meets hypocrisy.

What about free speech? Of course, leftists love free speech, right? Well, just not that speech. And not in that tone. And you can only say it if you have a particular ethnic background or are of a particular gender. But not if you’re of a particular political background. They think it should be a crime to offend someone with alleged hate speech (which they get to define), but only when certain people say it. They want to force people to speak a certain way, but also to only allow specific people get to break those rules, and the list of those specific people is an ever-evolving list depending on political expediency. Force and Hypocrisy.

Kavanaugh should be removed from the Supreme Court (force) because of his alleged violence against women. Keith Ellison? Yeah, he’s cool. (Hypocrisy.)

The list goes on. All that Obama did is prove that the only action the left is willing to execute is at the order of Government, under the threat of force, and even then likely involves them cutting out a cute little exemption which creates a class of hypocrites. No one in socialism sees themselves as “the worker.” They all envision themselves as some grand societal architect, and that they, in their endless benevolence, will do what is best for the rest of the plebes. It is only when they realize that they too will have to live under the rules they are setting, that they seek ways to create exemptions for themselves, because well, their benevolence has earned it. Obama’s words are no different. He wants to plan. He wants to discuss. He wants to pontificate. But when the sustainable rubber hits the road, he has less than zero intention of ever committing to, let alone engaging in, any meaningful change in his life.

But, like the hats of the pope and the defecation location of woodland bears, this was already a foregone conclusion.