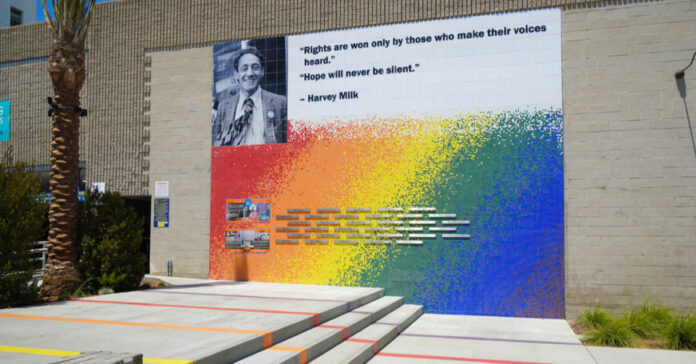 Why is it that the government tries to bend over backward in order to accommodate the LGBT community? Now, it’s being extended into the military…and a naval ship is being named after gay rights activist Harvey Milk.

Let’s be clear. There is a long and colored history of how Navy ships are named. Depending on the type of ship, there are specific naming rules. Aircraft carriers are commonly named after past presidents or members of Congress. Class attack submarines are named after states, littoral combat ships are named after regionally important U.S. cities, and the list goes on and on.

The replenishment oiler is a Navy ship that has officially been christened and launched in San Diego Bay. And, its name is the USNS Harvey Milk.

What did Milk actually ever do to warrant a ship being named after him?

That’s the question a number of people are asking.

Milk served four years in the Navy before he was forced out for being gay.

He was also a pro-LGBT politician serving on the San Francisco Board of Supervisors. In 1978, he was assassinated by a disgruntled former city supervisor.

Harvey Milk had a very short career in politics, and it wasn’t even on a national level. The only thing he really accomplished was being a martyr for the gay community.

Based on the Navy.mil website, John Lewis class oilers are “being named for people who fought for civil rights and human rights.”

Wait for a second, then…

Shouldn’t there be a long list of people who fought for civil rights and human rights that should get a Navy ship named after them before some local politician from San Francisco who only served for a year before he was assassinated?

Where are the ships for those who fought for rights for the entire country? Where’s Rosa Parks’ namesake? Or even Martin Luther King, Jr’s?

For a country, and more specifically, a Democratic Party that wants to say that the country is inherently racist, shouldn’t we be focusing on praising those who have made a difference and who have fought against racism?

Nope. This is where the Democrats continue to celebrate the minority instead of paying attention to the majority.

According to a Gallup poll, only about 5.6% of the American population categorizes themselves as part of the LGBT community. So, tell us again how Harvey Milk fought for civil rights and human rights for a large part of the population…

Navy Secretary Carlos Del Toro believes that this is an important way to celebrate the LGBT community…and apparently feels as though the Navy needed this as a way to reverse the wrongs of the past. In the ceremony, he explained that this is to “give inspiration to all of our LGBTQ community leaders who served in the Navy.” He went on to say that “for far too long, sailors like Lt. Milk were forced into the shadows or, worse yet, forced out of our beloved Navy.”

The naming of the ship is designed to right the wrongs of forcing people out of the military due to their sexual orientation. While it’s perfectly acceptable to right those wrongs, there are many other ways to do so. Naming a ship should be taken seriously rather than doting on a small percentage of the population that continues to demand equal rights when what they really want is more rights than everyone else.