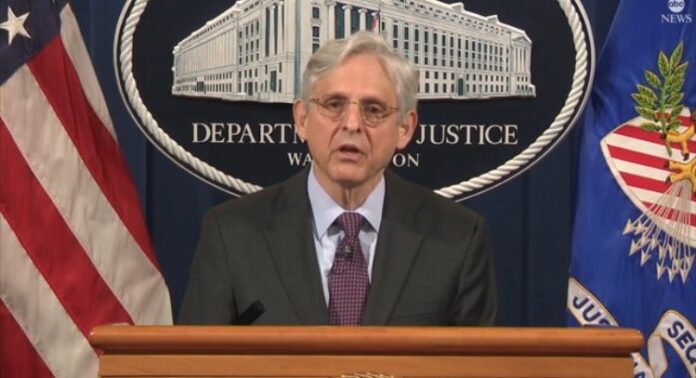 The Biden Justice Department is weighing their options on yet another crazy initiative. They are said to be “actively considering” new measures that will allow prosecutors to obtain more authority when it comes to bringing specific charges against those who stand accused of domestic terrorism.

“One of the things we’re looking at is would we need new authorities,” said Brad Wiegmann yesterday. As the deputy assistant attorney general for the department’s national security division, he is looking to make some major changes. Apparently, all of the current laws that are already on the book are simply not good enough.

The reality here is easy enough to understand. The Department of Justice under Biden is looking to pass new laws, so that they are able to go after the people that they disagree with more easily. Soon, it will be illegal to even disagree with the Biden White House about the most minor of issues.

We are joking, to an extent. It’s still alarming to see how willing the Biden White House is to take these sorts of measures. Domestic terrorism is actually a problem but they are not the least bit concerned about the real issues. Are they going after Black Lives Matter terrorists or violent Antifa groups?

You already know the answer to that. They are going to be going after the white supremacists because they are the real problem! Let’s be very honest here. When they break out terms like “white supremacy”, they are only speaking in code. This is how they let people know that conservative thinkers and Trump supporters are no longer safe.

The FBI claims that white supremacists are the biggest threat. However, did white supremacists cause the sort of pain and suffering that the aforementioned groups were responsible for last year? BLM and Antifa caused untold amounts of property damage, injured and killed countless others and burned cities to the ground. How can they possibly escape unscathed?

“Is there some type of conduct that we can envision that we can’t cover or would it be an otherwise benefit in having something else other than what we’re having now?” says Wiegmann. This is his way of telling us that he will have no problem prosecuting conservative thinkers if it comes down to it.

“Currently, no U.S. law lets the government designate domestic extremists as terrorists or bring specific charges for domestic terrorism. That contrasts with laws to combat international terrorism, which allow the government to designate groups and bring charges for providing those groups with material support,” says the latest Bloomberg report. It would seem that these measures are being taken unfairly but no one wants to admit this yet.

Rep. Matt Cartwright (D-PA), chairman of the subcommittee, is already offering up very strong words about the matter. “This is a cancer on our country,” he said. “Right-wing extremist attacks and plots have greatly outnumbered those from all other groups combined and caused more deaths as well,” Cartwright continued.

How is there no mention of the aforementioned violence that has nothing to do with white supremacists? Black on black violence is also being left out of the equation entirely. This is not fair to those who have nothing to do with any of the violence that currently takes place. White supremacy is not nearly the issue that Biden’s White House wants to pretend it is but this is the sort of ineffectual pandering that the Democratic party thrives on.

They love to act as if they are going to do things that benefit the collective whole but all they do is try to make sure that their voters are appeased. In fact, we would not be surprised if this was yet another situation where Biden decided to float an idea that is designed to make the liberals happy, without actually being bothered to follow through. This regime is going to be sure to let white people know that they are under close watch in the meantime, though.