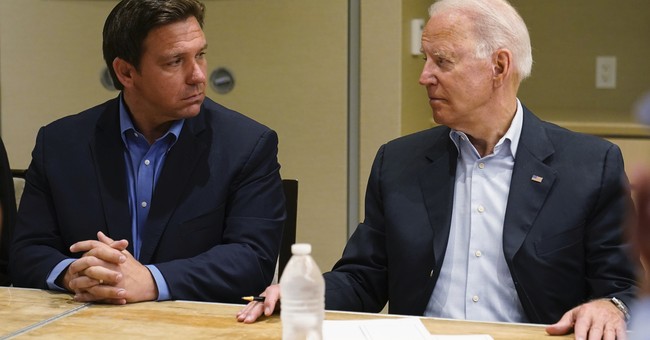 Florida Gov. Ron DeSantis continues to publicly and loudly oppose Presiden Biden’s dangerous border policies, and this week the war was escalated when DeSantis issued a direct threat in response to discovering that multiple planeloads of illegal immigrants are being flown into his state in the dead of night and under the radar.

Over the weekend, the DC Examiner reported comments from DeSantis’ public safety czar Larry Keefe who stated that some 70 flights that contained illegal immigrants have been flown into Jacksonville over a period of several months and that the flights were landing at a time when they thought no one would be paying attention:

“Over 70 air charter flights [on] jetliner airliners coming from the southwest border have landed at Jacksonville International Airport,” said Larry Keefe, DeSantis’s public safety czar. “On average, there’s 36 passengers on each of these flights. And that has been going on over the course of the summer through September.”

“We’re in a sad situation of trying to run an investigation. Who is facilitating this travel? How are they getting here? Who are the support people? Who are the sponsors?” Keefe asked.

Keefe also told the Examiner that no one at DHS, the DOJ, or any other related federal department would give Florida any specific info on the oversight of the flights in terms of who is dictating what, etc.

Understandably outraged, DeSantis announced this week that he is pursuing different options and taking multiple steps to either stop the flights or reroute the illegal immigrants elsewhere. On Monday night, he told Fox News’s Tucker Carlson that some of the options on the table were ending contracts for any private contractor who was allegedly assisting the Biden administration in this effort:

“We’re looking at what we can do. I think that they use these private contractors. So what we’re looking at is how can we fight back against the contractors? We can obviously deny them state contracts, which we will do. Can we deny them access to Florida’s market generally? Can we tax them? Can we do things to provide disincentives so they can’t do it? So we’re going to do whatever we can to do it,’ he added.

And just today, DeSantis said if the state had to, that they’d get some buses together and send the illegal immigrants that were being flown into Florida off to Delaware, which is Joe Biden’s home state.

“My view would be, if they’re going to come here, you know, we’ll provide buses and provide them. I will send them to Delaware and do that,” he stated during a press conference. “If [Joe Biden’s] not going to support the border being secured, then he should be able to have everyone there. So we will do whatever we can in that regard, and we are absolutely going to do everything we can.”

Of course, the Usual Suspects are accusing DeSantis of “racism” and “xenophobia” over this but the reality is that he’s got a very good reason to feel the way he does about the Biden administration sending over scores of illegal immigrants into his state who likely have not been properly vetted for potential safety and security risks (not to mention COVID risks):

A 24-year-old Honduran immigrant who’s charged with murder in the brutal stabbing death of a Florida man had crossed the US border illegally months earlier while posing as an unaccompanied minor, an investigation by The Post found.

Yery Noel Medina Ulloa was busted Oct. 7 in Jacksonville when he was found covered in blood after allegedly killing Francisco Javier Cuellar, 46, a father of four who had taken in the immigrant who told authorities he was 17.

Just awful, and as DeSantis noted, was a completely preventable murder if not for Joe Biden’s reckless open border policies.

Add this one to the “never forget” file, because no one in this country should ever forget when someone dies a death that likely would have never happened had the politicians who are elected to serve the people not promoted dangerous policies that put innocent people like Francisco Javier Cuellar in harm’s way.

Related: Prepare to Be Totally Shook by the Latest Media-Driven Ron DeSantis ‘Scandal’