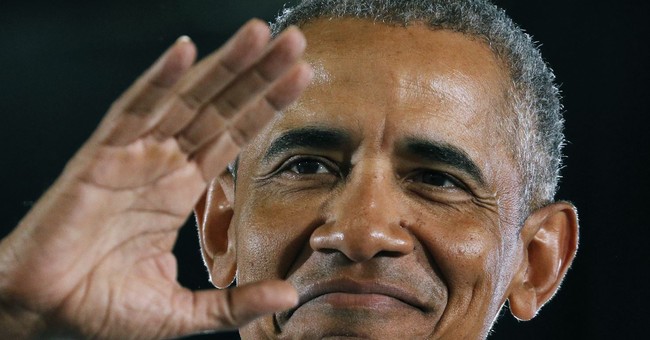 Narcissist-in-Chief. TelePrompter-in-Chief. Chicago Jesus. Whatever you call the 44th president of the United States — and I’ve called him plenty through the years — there’s never been a doubt that Barack Obama is President-for-Life of the Barack Obama Fan Club. I mean, this guy says “me” more times in a 20-minute speech than an opera tenor sings it in a year of warming up his voice. We’re talking a lot of mes.

So, when Barack Obama makes a verbal gaffe — as opposed to uttering something mind-blowingly hypocritical, or outright lying, both of which he’s wont to do — we must pause and take note. It’s a thing.

And by “pause and take note” I mean laugh our asses off, as opposed to the vile way the left ridiculed everyone from Dan Quayle to George H.W. Bush, to George W. Bush, to Donald and Melania Trump, and every other notable conservative unfortunate to make a public verbal misstep. I’ve said this in other contexts, but I believe we should behave more decently than the left shamelessly behaves with regularity.

Anyway, near the end of his faux dramatic speech at the COP26 climate conference in Glasgow on Monday, O referred to the conference location by a common nickname — of the wrong country.

“Since we’re in the Emerald Isles here, let me quote the bard, William Shakespeare. ‘What wound,’ he writes, ‘did ever heal but by degrees.'”

The term “Emerald Isles” refers to Ireland, not Scotland or other countries in the United Kingdom. On top of that, Shakespeare is England’s national bard, not Scotland’s. That honor goes to Robert Burns, author of poems and songs, including “Auld Lang Syne,” as reported by Fox News.

Our planet has been wounded by our actions. Those wounds won’t be healed today tomorrow or the next but they can be healed by degrees if we start with that spirit.”

Incidentally, Obama’s Monday gaffe wasn’t his first. About Europe, I mean. Remember when he said the following, in 2009?

“It was also interesting to see that political interaction in Europe is not that different from the United States Senate. There’s a lot of — I don’t know what the term is in Austrian — wheeling and dealing.”

The problem? “Austrian” is not a language.

We could point out more gaffes committed by the oh-so-elegant Mr. Obama, but the thing is, he’s yesterday’s news.

The days of Barack Obama gave way to the days of Donald Trump which gave way to the plague currently being visited on America by the Wrath of Man — the presidency of Joseph Robinette Biden Jr. and his clueless sidekick, Vice President Kamala Harris, who is horrifyingly just one heartbeat away from the unthinkable.

Yet, Obama being Obama, he appears to have no intention of completely leaving the “Look at me!” spotlight completely or anytime soon.

Along with purposely dividing America along racial lines throughout his presidency, O was also all over climate change — “the climate crisis,” “the existential threat of our time,” “the end of the planet as we know it” — and whatever other hyperbolic nonsense the left can concoct to continue trying to scare the hell out of uninformed voters. O will no doubt flit around the edges of both topics for the foreseeable future.

The climate alarmists won’t rest until they’ve convinced us that if we don’t outlaw internal combustion engine vehicles by Friday and immediately leave our homes to live in hemp-thatched yurts in centralized communes off the grid, the earth will look like a yuuge charcoal briquette by Sunday night.

Finally, as O began to wrap up his speech, noted Fox, he directed his comments toward young people in the audience, admonishing them that combating climate change is “a marathon, not a sprint,” and that while they should “stay angry” and “frustrated,” they should know that “solving a problem this big, this complex and this important has never happened all at once.”

“Vote like your life depends on it because it does,” said Obama said, as he closed.

O was right, America. Just not in the way he thought he was.