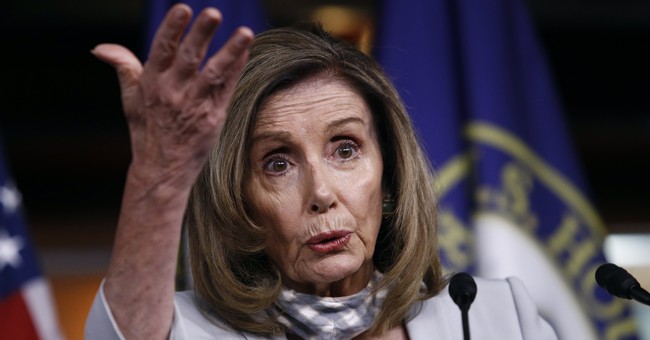 Before we dig in, I want to begin with a statement: My headline is factually correct. All of it.

These things are important to get right. Accusing anyone of lying is a serious charge. Failure to back up such a charge with facts can cause problems for the offender. That will not be the case in this article.

As things got heated in the House chamber on Friday over the next disastrous objective of Joe Biden and the Democrats, the laughably named $1.75 trillion Build Back Better Act, Speaker Nancy Pelosi stopped mid-speech to berate apparent laughter on the Republican side of the aisle, as reported by The Blaze, over a claim she had just made about the so-called “social spending” bill.

After she was finished with her little meltdown, Madam Speaker did in fact lie. Blatantly and demonstrably so. I will substantiate the accusation later in the article. We cool? OK, let’s proceed.

Of the socialist Build Back Better bill, Pelosi said: “It will be one of the most significant legislative undertakings that any of us have ever been part of.” That was not the demonstrable lie. Not yet, that is.

So after yelling at the unnamed Republican lawmaker — or lawmakers, as it were — Pelosi went full metal Pelosi. (That’s where the demonstrable lying began.) Here’s how that went down (emphasis, mine):

“So if you’re talking about how we want to have immediate and enduring difference for the workers and families, creating jobs, securing middle-class tax cuts, lowering costs for families, and making the wealthiest pay their fair share, all the while contributing to reducing the national debt.”

“Did I hear a laugh over there?

“Did I hear a laugh from those who added $2 trillion in tax cuts for the richest people in America, 83% of it going to the top 1%?

“This is paid for and more than paid for.”

Either way, as RedState reported on Friday, a new study from the prestigious Wharton School of Business destroyed Biden’s nonsensical claim that Build Back Better would not only cost “zero dollars” to America’s taxpayers but also that “zero dollars” would be added to the national debt as a result of BBB. Pelosi’s claims, then — that BBB will “contribute to reducing the national debt,” and second claim that BBB “is paid for and more than paid for” — constitute a demonstrable bald-faced lie.

Here’s a snippet from my article:

The bottom line: The study estimates the net cost of the Build Back Better bill would saddle taxpayers with an extra $2.42 trillion in debt.

The BBB plan is not paid for (as Biden and the Democrats claim); it would increase spending by $1.87 trillion, while increasing revenue by less than $1.56 trillion in the 10-year budget window.

And if all of the programs besides the clean energy credit become permanent, that would increase new spending by $3.98 trillion while revenue would only increase by $1.56 trillion.

Yet the despicable Speaker has the gall to berate Republicans for calling her out for lying.

Let’s say it again, shall we? Nancy Pelosi flat-out lied on the floor of the House.