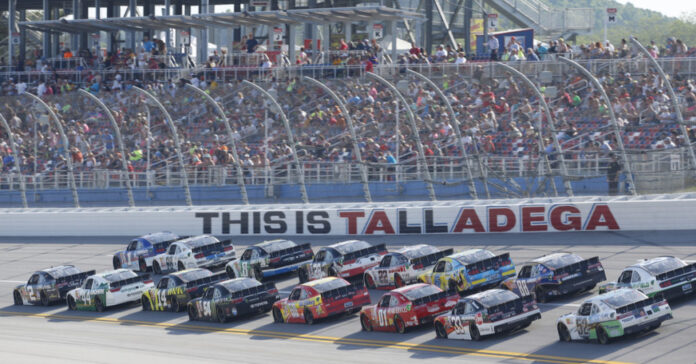 Who the heck is Brandon and why does he need to go anywhere? “Let’s go Brandon” is rolling off of people’s tongues, being hung on banners at football games, getting printed on t-shirts, and being seen and heard everywhere. You’re probably well aware that the phrase is a reference to Joe Biden. It’s a way of cussing about him when the kids are around or if you’re chewing the fat with your preacher and best behavior is warranted.

But where did the phrase come from? Who started it? Republican Rep. Bill Posey from Florida was already in on the new “codename” for Biden when he ended his speech on the House floor with a raised fist and the words “Let’s go, Brandon!”

Some of the lawmakers on the right chuckled under their breath while those on the left stared at him like he’d lost his mind. The phrase had already been growing in popularity in private right-wing circles, but now that it’s out in the open, they’re having a heyday with it.

Before its public popularity, the phrase has become akin to a secret handshake among Republicans who detest Biden. It allowed them to recognize one another without hiding the fact of who they support. Now it’s free to use by everyone.

Here’s the skinny. The phrase was born at the Talladega Superspeedway during an Oct 2 NASCAR race. A 28-year old driver named Brandon Brown took home the trophy. As Brown was being interviewed by an NBC reporter, the crowd behind them began to chant.

The reporter thought the crowd was chanting “Let’s go Brandon” in appreciation of the young driver’s first Xfinity Series win, but boy, did she get it wrong. They were chanting “F*** Joe Biden” hoping the television cameras would pick up on them. And now, you know the exact meaning of the phrase.

NBC ditched the clip and promised to try to do better by working harder to eliminate ambient crowd noises. NASCAR tossed in its two cents by agreeing to do whatever it could, which isn’t much if anything at all. They both agreed that it is what it is and that their ability to stop such things in the future is limited.

When Biden visited Chicago last week to talk residents into getting vaccinated he was greeted by people lining the streets holding “Let’s go, Brandon” signs. The same thing happened in a park in Virginia where Biden spoke in support of Democrat governor candidate, Terry McAuliffe.

Several of the sign holders in Virginia eventually put them down in favor of the other signs they had brought with them that spelled out the meaning of the phrase, “F*** Biden.” They felt the need for the message to be made clear.

A Southwest Airlines pilot got himself into a bit of a jam after he landed the plane. He thanked the passengers with a final and enthusiastic “Let’s go, Brandon” over the intercom.

The airlines, forced to make a statement, said the following; Southwest “takes pride in providing a welcoming, comfortable, and respectful environment. Behavior from any individual that is divisive or offensive is not condoned.” Notice how they didn’t apologize?

Now you’re an authority. You know everything about the phrase there is to know. Use it wisely and use it often. Oh. And, “Let’s go, Brandon!”