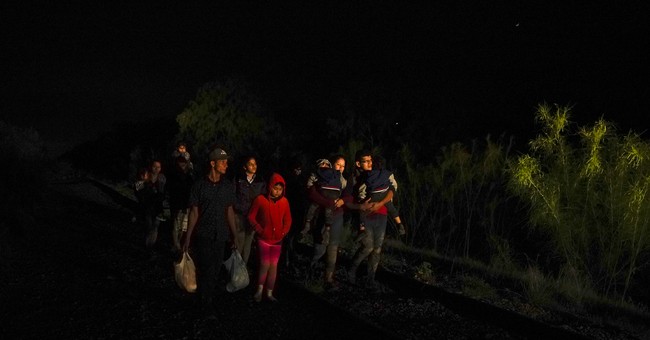 Oops, he did it again.

Except there was no “oops.” Not this time. Not the first time. Not any time. The Biden administration has again been caught shipping planeloads of illegal aliens around the country — this time to Florida.

As reported by Washington Examiner on Sunday, the office of Florida Gov. Ron DeSantis confirmed more than 70 flights of illegal aliens from the southern border to Jacksonville have landed “in the dark of night” in recent months. Moreover, the Biden administration has kept Florida officials in the dark, as well.

“On average, there’s 36 passengers on each of these flights. And that has been going on over the course of the summer through September,” said Larry Keefe, DeSantis’s public safety czar.

As Washington Examiner noted, this is the first time Florida officials have disclosed the number of confirmed illegal alien flights arriving in the state since the summer. DeSantis’s office has “scrambled in recent weeks to uncover who is facilitating the mystery flights landing in northern Florida daily.”

Moreover, as has been the case with other Biden “mystery flights,” the administration has refused to disclose to state or local officials any information about the flights.

The Department of Justice, Department of Homeland Security, and Department of Health and Human Services will not tell the state of Florida who is overseeing the flights, the names of those on the flights, or where the migrants are being taken. None of the agencies or the White House responded to a request for comment.

So much for President “Unity.”

“We’re in a sad situation of trying to run an investigation,” said Keefe. “Who is facilitating this travel? How are they getting here? Who are the support people? Who are the sponsors?”

All good questions, Mr. Keefe. Perhaps you should check with Biden press secretary Jen ‘Circle-Back’ Psaki, I’m sure she’d be more than happy to circle back with you on that.

As you “might” recall, this isn’t the first time Team Biden has been caught flying planeloads of illegal aliens across the country in the dead of night. As RedState reported in mid-October, two charter planes landed at the Westchester County Airport north of New York City. Most of the passengers who got off planes appeared to be children and teens, with a small number appearing to be men in their 20s. Westchester police stood idly by as the whole thing went down. The flights had been underway since at least August.

Here’s the thing: Does it ever occur to you that the Biden administration purposely and brazenly continues to pull off in-your-face crap, time and time again, daring the sane and rational among us to fight back, knowing full well that shameless lapdog media sock puppets like Don Lemon, Nicolle Wallace, Rachel Maddow, and Brian Stelter will rush to defend the administration’s every move, no matter how disastrous?

Is there any doubt?

The answer to Hold My Beer’s question, “So why the secret, Joe?” is the same answer for everything Biden’s radical-left handlers — and by extension Biden himself — attempt to get past the American people.

From indoctrinating America’s children with Marxist-derived Critical Race Theory, to lying about handing $450,000 to illegal aliens — up to $1 million per family –only changing their story when Biden gets caught out of the loop, to shipping COVID-positive illegals around the country while at the same time trying their damnedest to mandate vaccines for children as young as five, U.S. corporations, and most likely private companies, the answer is because the left knows the majority of Americans reject their policies outright.

Thing is, they don’t give a damn whether we agree with them or not. They reign supreme.

How dare we question the wise and powerful Oz?

In totally unrelated news, check out the following article from my colleague Nick Arama. When I first saw Nick’s piece, I immediately bestowed upon it the prestigious RedState Headline of the Day award.