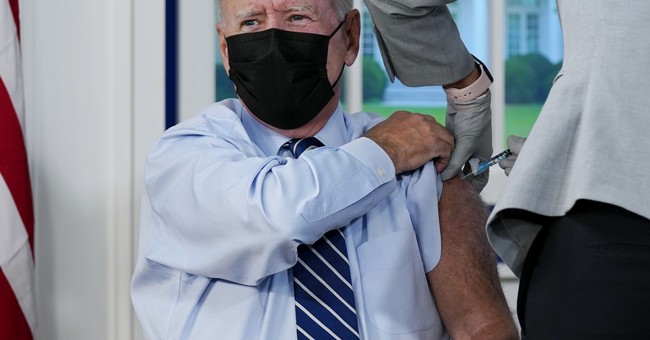 The Biden administration signaled today that they are going to continue to push the envelope when it comes to vaccine mandates. That came from US Surgeon General Vivek Murthy, who spoke to CNN’s Martha Raddatz this morning.

According to Murthy, the administration is not ruling out the possibility of expanding the current vaccine mandate to cover small businesses as well, i.e. those with less than 100 employees.

RADDATZ: And, Dr. Murthy, if the law survives legal challenges, will the administration be extending the mandate to smaller employers with fewer than 100 employees?

MURTHY: Well, Martha, certainly nothing is off the table at this moment. But the focus right now is on implementing the current rule that OSHA put out.

There are a lot of problems with this, but the most important one has to be that the 5th Circuit has already put a stay on Biden’s first vaccine mandate for private businesses. The court cited “grave constitutional” questions in its decision and has given the administration a deadline to respond to its concerns. Given that, it’s especially disturbing that Murthy would go on national TV to suggest another mandate is coming, while knowing that the first one has already run into a legal brick wall. And if I could bet on it, I’d bet it ends up being struck down completely in the near future.

But, isn’t that really the point? This administration is completely lawless and has no care at all about how their decisions affect the lives of everyday Americans. How in the world would OSHA enforce a mandate on tens of thousands (perhaps hundreds of thousands, if you count all individual LLCs and S-Corps) of small businesses? The answer is they can’t, and they likely do not have the legal authority to do so anyway.

Further, the nation is already straining under the weight of a supply chain crisis. The economy needs all the workers it can get. Arbitrary and pointless vaccine mandates put more stress on the jobs market and cause further shortages of products and services. Yet, the Biden administration just doesn’t care. They exist within an impregnable bubble of incompetence and malice.

Lastly, let’s note that the definition of being “vaccinated” is almost certain to change over the next several months. We are already seeing studies showing waning immunity. Are mandatory boosters around the corner? All the while, the case for mandates simply doesn’t exist. Everyone spreads COVID, and no amount of forced vaccinations is going to stop what has obviously become an endemic virus. That natural immunity is not recognized in this discussion by the federal government is also asinine.

Yet, I feel like I can say all that until we are blue in the face, and it just won’t matter to the Biden administration. They have gotten a taste for unlimited power and do not plan on relinquishing it. In the end, it’s going to be up to voters to stop this and to send a message that this can never happen again.