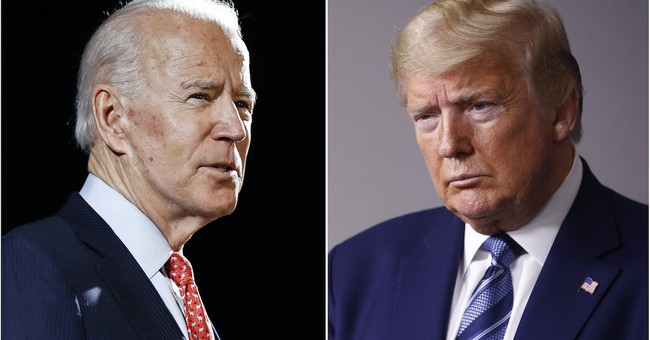 Joe Biden went to Virginia the other day to help Terry McAuliffe lose his bid to regain that governor’s office, in a most embarrassing slap at Biden’s own administration and weak leadership.

A considerable chunk of Biden’s 18-minute remarks was devoted to – wait for it – ex-president Donald Trump, who wasn’t in the race and smartly had not said much about the Virginia contest.

“Remember this,” Biden said, “I ran against Donald Trump. And Terry is running against an acolyte of Donald Trump.”

The Democrat then went on to excoriate his predecessor, saying Trump “drove a mob of insurrectionists to breach the Capitol on the 6th of January. And to this day, he incites people all around the country…. A breach of the Capitol — that didn’t happen even during the Civil War.”

Those Biden remarks didn’t get much media attention, quite properly, because they’re so old and worn, like Biden himself. But they did reveal a remarkable feature of American politics in 2021.

Former President Trump is long gone from Washington’s halls of powers. But his personality and absent presence still inhabit the minds of Democrats — Biden, McAuliffe, Chuck Schumer, even Nancy Pelosi. They seem unable or unwilling to evict him from their cranial real estate.

Like that party’s entire House leadership, Pelosi is 81 now and, like Biden, showing her mental slowdown. CNN’s Jake Tapper had to remind her who was the last president when Donald Trump’s name slipped her mind.

D.C. Democrats remain so shocked still that the usurper could have defeated the Clinton Syndicate and could have so dominated the daily – even hourly – life of the nation’s Capitol establishment for four years, while driving so many policy and judicial achievements to success.

Of course, Democrats also cling to their Trump syndrome because they think it’s politically advantageous. Even Republican Glenn Youngkin’s convincing win over McAuliffe, along with Republicans electing lieutenant governor and attorney general, seems unlikely to dispel that belief, so firmly has Trump become a fundamental part of Democrats’ catechism.

They needed Trump in last year’s campaign as the threat because of the weakness and feebleness of their candidate. He’d knock off campaigning by noon many days, so inept was he and so confident were they that Trump antipathy would carry the day.

But News Flash: Trump’s gone. No mean Tweets. No daily news scrums. The target of Dem anger has disappeared, save for occasional rallies and frequent, daily news releases that echo out to the faithful but not much farther.

In its place is Joe “What Am I Doing Here” Biden providing daily evidence of dementia and presidential incoherence. Here’s his explanation of and solution to the gas price surge:

I think if you take a look at what we’re talking about — you look to this coming Thanksgiving — you know, we’re in a situation where we find that we are in a very different circumstance.

Watch Biden walk any distance. Notice he’s always alone, walking out to Marine One. The Deep State running him can’t afford to have energetic, physically confident younger folks by him for contrast. Biden is clearly concentrating on each step, as elderly men are prone to do, even if they haven’t fallen three times attempting to board an airplane.

Biden turns 79 in less than two weeks. He’d be 82 after the 2024 election. Presidents can recover from scandals — apologizing, feigning contrition, firing people, changing the subject with new programs.

Joe Biden will not be running in 2024, even if he makes it there.

The repetitive image of weakness, physical and mental, has become impermeable, even to the wishful eyes of ardent supporters. Notice their silence when the un-Trump dozes off in public now or forgets the name of a cabinet member standing next to him.

Then there are the festering specters of soaring gas prices and mounting inflation, which Biden assured was a blip, and thousands of green-card holders still stranded in Afghanistan, despite Biden’s promise to evacuate everyone. National media kindly ignore this moral stain.

Reminder: It was soaring inflation and U.S. hostages in Iran that enfeebled Jimmy Carter’s reelection bid in 1980.

There’s Biden’s distasteful authoritarian responses to vaccine resisters. And large, looming tax increases, allegedly only on the wealthy, which even Pelosi admits would provide a mere fraction of the trillions needed.

Some national tragedy might briefly rally Biden support, as 9/11 did for George W. Bush. But it could also expose further Biden’s incapacity to carry on. And his invisible sidekick doesn’t inspire confidence either.

Trump’s hinted strongly he will run in 2024, when he’d be Biden’s age last year. I think he will.

If Trump is politically savvy, which he sometimes is not during an ego surge, he’ll withhold any announcement until after next year’s midterms to avoid giving Democrats that ammo.

And allow the looming destruction of Biden’s slim congressional control to take place in all its fiery glory, causing MSNBC heads to explode on-air. You can understand now Pelosi’s desperation to get Biden’s agenda through ASAP and Schumer urgently pushing judicial confirmations.

In a very real way, social media’s ban on Donald Trump is a gift that keeps on giving. In the absence of Trump’s tweeted insults, gratuitous personal counter-attacks, and self-praise, many are left with a stark contrast with Biden.

Trump slept four or five hours a night, never in public. He sounded angry at times, but not incoherent. He was decisive. His energies seemed boundless. At times, he did four major campaign rallies a day in different states.

Speaking from personal experience, two candidate rallies in one day is Herculean. That’s why aides have spare wardrobes at hand to replace sweat-soaked shirts and suits.

Americans these days are treated to arcane congressional dramas with competing cadres of Democrats arguing, counter-arguing, and stalling over precise provisions of prized political goodies to spend trillions (with a “T”) more.

The Freedom Caucus posed some obstacles to Trump’s broad tax cuts. But he got them done. Trump promised to crush the ISIS caliphate quickly. He did. He promised to encourage, deregulate, and permit energy independence. He did.

At the moment, Trump is by far the most popular candidate among GOP faithful. That’s in part because, right now, there’s no realistic alternative, no one willing to challenge No. 45. That will likely change come 2023.

To be viable in 2024, Trump would need to stop whining about 2020. He could. He’d need to drop his chronic grudges, become the unity president Biden promised. That might be beyond Trump’s emotional skills.

But Trump could talk about leading the nation forward into the future, as his party challengers wisely will. And he could update his old campaign promise to MAGA-A. Make America Great Again, Again.