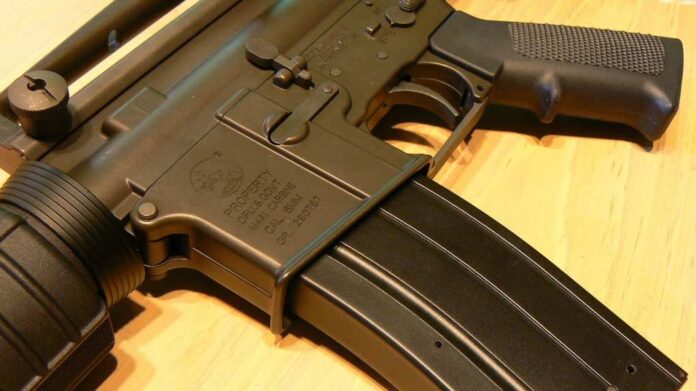 When we talk about the Second Amendment and states that staunchly support it, there’s a general rule of thumb: the farther west or south a state is, the more likely it is to be one conservative and two not very fond of gun control – that is unless you are talking about the west coast itself.

And so, it’s not surprising when states like Texas rise up against newly proposed gun laws and expose them for what they are, which is unconstitutional in most cases.

But for some reason, we don’t usually hear much about the other western and southern states doing the same. To be sure, they do.

Although it doesn’t come from a state government, another prime example shows precisely what the citizens of the western state of Wyoming think about firearms and Biden’s administration’s push to take them from Americans.

The company has recently begun offering customers new and existing one hell of an offer. When you order a new roof through them, you don’t just a thank you card but a new complimentary AR-15. And before you ask, yes, the deal is entirely legal.

Wiggins Construction’s marketing director, Matt Thomas, recently told the Cowboy State Daily it’s simply a way to thank their customers for their business and welcome people into their community.

And what a way to say that… Most companies give out a thank you card, possibly a discount on your next purchase, or maybe even a gift card to a local restaurant or something.

Now, of course, not everyone thinks that. As Thomas told the Daily, the company has gotten “quite a bit of flack from it.”

As you well imagine, news of a deal like this, especially in such a controversial time like this, has spread far and wide. And for more than a few in liberally-held blue states, they aren’t exactly thrilled with the idea.

Thomas says, “I don’t know how this story’s gotten to New Hampshire and to Chicago, Illinois, and central California. But we are getting phone calls, voicemails from people saying all sorts of negative stuff about us, you know, stuff like ‘baby killers,’ and we’re distributing weapons of mass destruction to the public.”

I have just a few problems with people who do this.

For starters, did they really just call gun-loving conservatives ‘baby killers’ when their party is the one endorsing abortion?

Secondly, they must not be very familiar with AR-15s or guns in general, for that matter.

If they were, they’d know that an AR-15 isn’t a ‘weapon of mass destruction.’ As the Cowboy State Daily points out, AR doesn’t stand for “assault rifle,” as so many on the left presume. Instead, it initials ‘Armalite’ rifle, a specific small arms engineering company that initially created the AR-15 and AR-10 designs.

However, since this creation, the name has come to refer to all like weapons, much like the terms ‘band-aid,’ ‘zipper,’ and ‘escalator’ are actually specific brands that are now used to describe any brand of similar products.

Another thing to note is that nearly no one who owns one does so because they plan to take it to a school or crowded shopping center.

In fact, most use this weapon for varmint hunting, as it can be configured to shoot several different types of ammo and the accuracy needed for hunting big game like whitetails, which is most often hunted for its meat, is not a must for shooting animals like coyotes and raccoons.

As for the locals, Thomas says, they love the idea, as well as the “tangible” gift. “We’ve got probably three voicemails this morning from people like, ‘Hey, we don’t need a roof, but we saw your ad… and we just want to say that it’s awesome, and we really support what you guys are doing.”