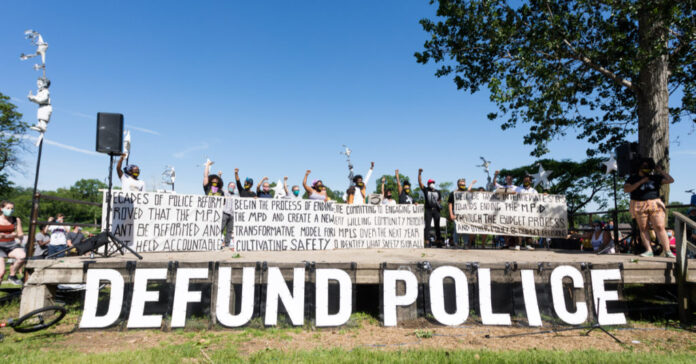 How can anyone soon forget the violent chaos that erupted in Democrat-run Minneapolis following the death of George Floyd? The city became a landmark for all things liberal as then-President Donald Trump condemned both the city and the state for encouraging citizens to act out in rebellion. Things may have quieted down in the Twin Cities, but there’s no escaping the storm’s impending aftermath that has some residents terrified.

It all began with the unfathomable notion of defunding police departments so they can no longer be menaces that go around hurting people. Cops do far more harm than they do good. Even after having a fairly good while to stew on the silly notion, Minneapolis still wants to follow through with that thought, and in a big way.

If Minneapolis lawmakers get their way, their liberal kingdom shall hereto forth have no police department to unjustly ruin the daily lives of its citizens. They aren’t just wanting to cut back funding, they’re planning on giving the entire force pink slips. The force will be replaced by a newly formed “Department of Justice.” How friggin’ quaint would that be?

Here’s how things have been going in the town. A guy named Marques Armstrong was getting ready for work one morning and had just climbed out of the shower when he heard gunshots coming from his backyard. Instinctively, he hit the ground before running in to check on his wife and daughter who were still sleeping. Out of a window, he saw a car speeding away.

As anyone would do, Armstrong called the cops, who for the most part weren’t very interested. Things of this nature are common in the predominantly Black north end of town and have only worsened since the police stopped cracking down. So even though the police force still exists, for now, they aren’t doing their jobs anyway.

Armstrong summed the scenario up by saying, “Everybody says we want the police to be held accountable and we want fair policing, but no one has said we need to get rid of the police.” Armstrong, who owns a clothing store and a mental health practice, also considers himself a Black activist who wants to see his community improve. At the same time, he understands the necessity of law enforcement for this to happen.

“There needs to be a huge overhaul from the ground up, but we need some form of community safety because over here shots are ringing out day and night,” he said.

Residents in the hardest crime hit area of the city say a lack of law enforcement is going to leave them more vulnerable to becoming victims of what’s already been allowed to reach almost uncontrollable levels. It was the spoiled elite white liberals who were screaming to get rid of the police department, but they aren’t the ones dealing with crime every minute of the day and night. All the residents in the north end ever asked for was to be treated fairly and with respect.

Money from both sides of the fence has been pouring into the pockets of lawmakers to assist them in picking one side of the issue or the other. The thought is that whatever the outcome, it’s going to have an impact elsewhere. Other liberal states and cities will either scrap similar ideas or run full speed ahead with them.

Despite the opposition, Minnesota and the city of Minneapolis remain the definition of liberalism. As such, the city will likely earn its place as a shining beacon on the hill of lawlessness as it falls and crumbles from within. It’ll all be due to what can only be referred to as sheer stupidity. But, look who we’re dealing with here…