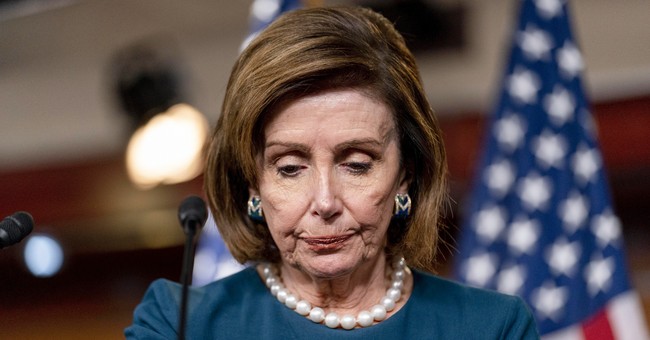 We wrote earlier about the challenge that Democratic House moderates were throwing down in front of House Speaker Nancy Pelosi (D-CA) — that they weren’t going to pass the Build Back Better bill (BBB) until they had a chance to be able to read the final text of the massive bill — massive in text with over 2,000 pages and massive in the amount of money. The moderates want a CBO score before they will vote on it. They want to know the real cost — not what just what Joe Biden claims it would cost.

So Pelosi bowed to the moderates and uncoupled the bipartisan infrastructure bill (BIF) from the BBB bill — something she had avoided doing so as not to anger the progressives — saying they would deal with the BBB later, but that they would hold a procedural rule vote as to BBB with the BIF vote.

But that lost the progressives again. She could only afford to lose 10 votes for the infrastructure bill which she could pick up with Republican votes. But now, she’s reportedly lost 20 votes.

The progressives believe if they lose that coupling of the BBB with the BIF that they will not get the BBB.

It’s unclear if they have the votes for the infrastructure vote now. But Pelosi is reportedly planning on going ahead with that vote and hoping that she’s cowed some of the progressives into it, that they’re bluffing and don’t want to be seen as voting “no” on the infrastructure bill.

There’s no doubt the Democratic civil war is still very much in play.

But leadership is claiming they anticipate voting on BBB sometime before Thanksgiving.

“I’m absolutely convinced, beyond a doubt, that before Thanksgiving, the week of the 15th, we will pass the Build Back Better legislation,” Hoyer said.

House Speaker Nancy Pelosi said Democratic leaders “had hoped to be able bring both bills to the floor today,” but opted to “honor requests” from some lawmakers for more clarity on the legislation’s financial implications.

This is the fourth time Pelosi has tried to do this. It’s not clear that she has enough to get this BIF bill through and if it does go through, then it probably is far less likely that the BBB will go through. In the words of Sen. Joe Manchin (D-WV), while he sees a need for infrastructure, he doesn’t see the same rush need for the BBB.

So hold on to your hats, will Pelosi have to do this a fifth time?