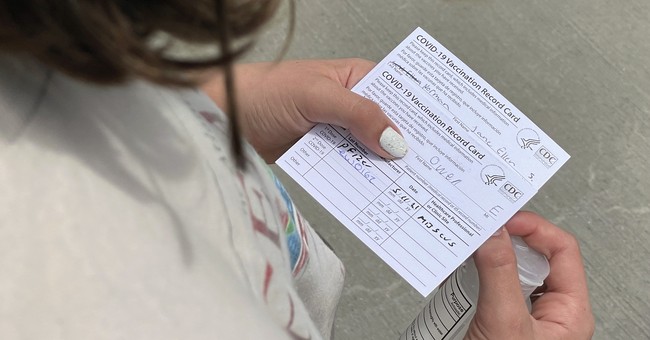 As I have stated many times here on RedState, I am fully vaccinated. This isn’t some ivory tower virtue signaling, rather just a statement of fact, so you know from where I am coming. I don’t judge the unvaccinated or advocate actively for people to get vaccinated. I chose to early on as a result of having two 70+-year-old parents, who I visit often. Yet, as time has gone on, and reading the data that has come out regarding those vaccines, I don’t necessarily find them dangerous as much as I do less effective than they are advertised to be.

This belief has been complicated by the government instituting various vaccine mandates on the local, state, and federal levels. Regardless of how I feel about the vaccine, or my choice to be vaccinated, the decision to get vaccinated should remain a personal one, or at the very most, one made between the individual and their doctor. The moment that government began extending their mask mandates, creating new vaccine mandates, and discussing perpetuity of those until which time more people are vaccinated, I returned to do what I do best: Telling the Government to pound sand. When just recently I was asked if I wanted to get the booster, I replied, “No, and that will continue to be ‘no’ as long as the government removes others’ choices in whether or not to be vaccinated at all.”

What states have the highest rates of vaccination? Right now, Vermont has the highest at 71.5%, followed by Rhode Island at 71.2% and Connecticut at 70.9%. Now for a reference, scientists have believed that 60-70% immunity levels are needed to achieve “herd immunity,” placing all three of these states at the top of places we could expect COVID numbers to be falling substantially. It would not have just suddenly stopped the spread in those states, but it would have slowed significantly as they approached that 70% number.

I’m sure if we compare those numbers to the lowest of vaccinated states, we would see a different story, right? Well no.

Well with as horrible as the media has been telling us Florida is, shouldn’t we be able to find out just how horrible of a vaccination rate they have? The vaccination rate in Florida is actually much higher than you’d probably expect, at 59%, 17.9% higher than West Virginia, and 12.5% lower than Vermont. Right in the middle, so where do you think Florida’s current new case rate fell? It is just a mere 7 new cases per 100,000 residents. How does that stack up against a mandate pushing tyrant of a big state? Say….. Gavin Newsom? Even with all the mandates and vaccine giveaways, Newsom has had, California only has a vaccination rate 2.6% higher than that of Florida. Newsom has also been very heavy-handed with mask and social distancing restrictions, so one could expect their new case number to be at least somewhere near Florida’s, right? Wrong. California has 21 new cases per 100,000 residents currently, 4 times higher than Florida.

What does this all mean? Vaccines certainly do not currently correlate to lower new case numbers. That doesn’t mean there are not some medical benefits to the vaccines, but then those medical benefits should be a personal choice and not one mandated by government. One can hope, though, that as more people begin to understand there is no correlation, more will begin to stand up to fight against these silly mandates.

All of the vaccination rates for various states were found here.

All of the new case numbers were found here.

All of the state populations were found here.