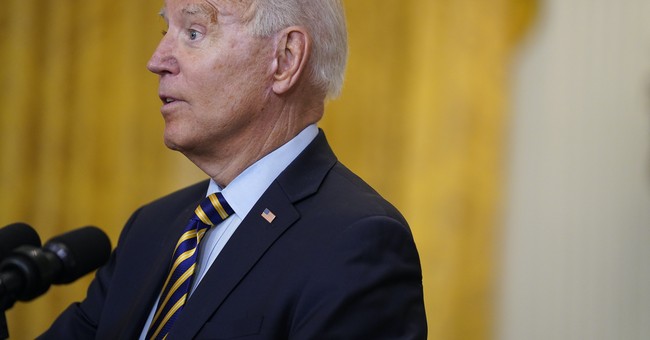 We’ve seen Joe Biden’s weakness displayed on the world stage over this past week.

Unfortunately, so have our enemies and those who would want to challenge us. When you have a leader who is so compromised, it puts the country and us all in danger because it gives those who would test us ambitious thoughts.

We reported how Biden performed at the G20 and the COP26 climate change summit. It did not go well. At the G20, he was late to his press briefing and then ended up calling on a pre-approved list of reporters. He blew off a question about payment to illegal aliens from Fox’s Peter Doocy after the press briefing. Then at the climate change conference, he seemed to fall asleep. He also went off script briefly and seemed to forget what he had just said, repeating the same thing and not even realizing it, in a scary moment.

One of the most embarrassing moments at the COP 26 was when Joe Biden apologized to the other nations for the U.S. pulling out of the Paris agreement in way reminiscent of Barack Obama and his apology tours.

Now, as we observed, we didn’t have anything to apologize for. Despite pulling out of the Paris Accord, we lead other countries in reducing carbon emissions. But the Democrats wouldn’t know what to do if they weren’t trying to diminish America before the world.

But now China is mocking Biden’s apology, saying that shows he is “powerless.” The Global Times (a government media outlet) ridiculed his “noble” apology and said that there were some who couldn’t wait until 2024 when the the Republican Party and/or President Donald Trump then apologized for Biden’s apology. Xu Liang, an associate professor at the School of International Relations of the Beijing International Studies University, claimed that such displays by American leaders showed “the declining U.S.”

That’s what China thinks of Joe Biden — they don’t even take him seriously. China — who couldn’t give a darn about their emissions — completely blew off the climate summit. Meanwhile, they pump out the most emissions in the world — exceeding the U.S. and other developed nations combined — and they didn’t agree to anything that would restrain them at the ridiculous conference. They’re also blew off the G20. So any decisions or agreements that the nations came to in their absence, they might not agree with and they wouldn’t necessarily be held to.

Meanwhile, Biden is apologizing for the U.S. So he does appear powerless to the whole world. Biden is always talking about how well he knows Chinese leader Xi Jinping. Looks like Xi has a very good idea of Joe Biden as well and that’s not a good thing.