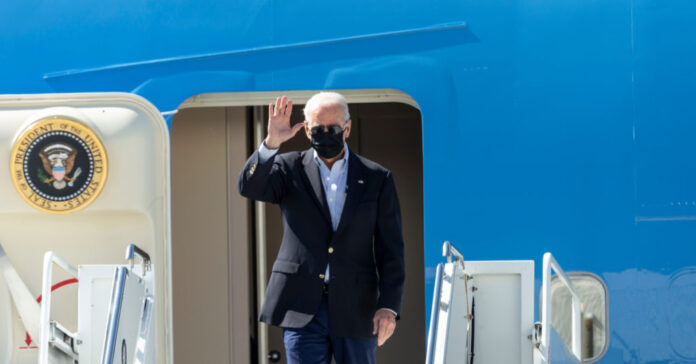 Biden has one job whenever he opens his mouth: try not to sound like a fascist. Unfortunately, he’s becoming more and more like a dictator. He believes that it’s okay to forcibly suppress, and that means that anything he says is going to be problematic.

And, of all places where he could open his mouth and reference a fascist, he did it in Rome. As you can imagine, it didn’t end well for him.

While Biden was at a G20 meeting, he made a comment about the “trains running on time.” And the fact that he made it in Rome is what makes it ten times worse. The phrase is commonly associated with the former Italian leader Benito Mussolini…who happened to be a fascist.

At what point do we pull Biden out of global politics? If Trump had said something like this, the press would have been all over him. The Democrats in Congress may have even been trying to figure out if it was an impeachable offense. But, since it’s Bumbling Biden, they give him a free pass.

Though, not everyone is willing to give him a pass.

New York Magazine had issued some advice to other politicians. Margaret Hartmann and Chas Danner suggested that “When you are trying to convince America that its new leader is not a fascist, it’s best not to make any Mussolini references.”

After Biden made his fascist comment, he must have been exhausted. This meant that he missed out on an important ritual that was performed with most of the G20 leaders. Everyone visited the Trevi Fountain to toss a coin in. However, Biden wasn’t part of this tradition, and it was clear that he wasn’t there.

The question is, why? Why wouldn’t Biden stick around long enough to partake with all of the other G20 leaders? Perhaps his handlers thought it was best if he didn’t so that he didn’t make any more references to Mussolini.

Quite a few conservative media outlets were quick to point out that Biden was missing from the photo op. And, he was almost missing from one of the first photo ops of the event. He was down at the very end — and depending on the outlet, he was cropped out entirely.

That’s what the other world leaders think of Biden. He’s not important enough to be included. And, if he gets shoved to the end, it’s no big deal. And, it’s not like the meek Biden is going to demand to be front and center. He’s a pushover and the G20 leaders not only recognized that but used it to their full advantage.

The first G20 meeting in Rome also resulted in Biden showing up about 20 minutes late. Some say it was because he was “playing with elevators” while others say that he might have woken up from his nap a bit late.

See, this is the problem when there’s a 78-year-old president. He’s 13 years past the average retirement age for an American. And, with obvious signs of dementia, the man clearly needs a nap every few hours in order to keep up with global politics.

Now that he’s off to Glasgow, Scotland, who knows how many other blunders he’ll make. And, it’s almost given that the handler that allowed him to make the Mussolini comment will inevitably be counseled if not all-out fired.