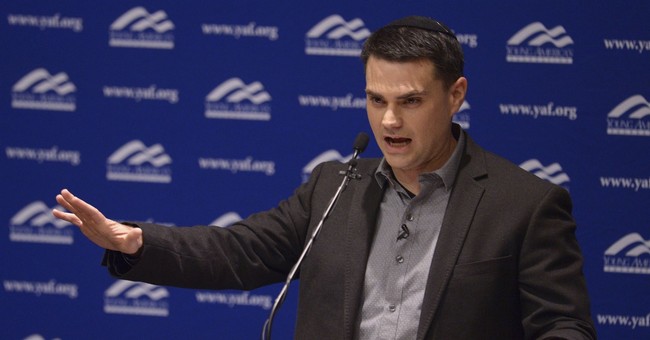 The pitched battle continues over Joe Biden’s controversial September announcement that he would impose an OSHA rule requiring all businesses to mandate COVID-19 vaccinations or at least weekly testing requirements for workers at U.S. companies with 100 or more employees, beginning on December 8.

But, as we reported earlier today, Biden has now backed up the mandate start date, no doubt reeling from the thorough ass-kicking delivered to the Democrat Party in Tuesday’s off-year elections, with a new enforcement date of January 4, 2022. Just one problem, Joe: The Daily Wire co-founder Ben Shapiro.

As Daily Wire reported, it filed a lawsuit against the federal government on Thursday over Biden’s vaccine mandate order, While Shapiro also fired up Twitter with a tirade against Biden’s “gross overreach,” declaring: “Leave everyone the f**k alone!” We’ll get to that in a minute.

Co-Founder and Co-CEO Jeremy Boreing announced Daily Wirey would not comply with the mandate.

The Daily Wire will not comply with President Biden’s tyrannical vaccine mandate, and we are suing the Biden Administration to put a stop to their gross overreach.

President Biden, the federal government, social media, and the establishment media have conspired to rob Americans of their freedoms in the name of public health.

They have broken faith with the American people through conflicting messaging, false information, and by suppressing data and perspectives with which they disagree.

Daily Wire said its lawsuit “alleges that the Biden Administration lacks constitutional and statutory authority to issue the employer mandate and that the mandate failed to meet the requirements for issuing a rule taking effect immediately without the normal process of considering public comments.”

The federal government lacks the legal authority to compel private employers to play the role of vaccine or COVID police, lack the police power to force private employees to undergo medical treatment, and may not ignore constitutional limits on its ability to regulate every aspect of our lives.

The Biden administration’s attempt to impose this unprecedented and unlawful federal medical mandate on the U.S. workforce without considering the public’s views is arbitrary, capricious, unsupported by the evidence, and would produce a willfully ignorant rule.

As I said at the top, Shapiro took to Twitter to unleash on the Biden administration as only Shapiro can; with the ferocity of a fired-up drill sergeant on crack. Shapiro fired off 12 tweets, completely blistering Biden and the OSHA vaccine mandate. Here are a few highlights:

So, OSHA is promulgating this insanely authoritarian regulation on an emergency temporary basis. They’re seeking to make a rule permanent. Here are the questions they are asking about when formulating a permanent rule:

1. Forcing it on employers with under 100 employees.

3. No exceptions for prior immunity.

4. Getting rid of testing as an alternative to vaccination.

“In other words, this is only the beginning of the authoritarianism,” Shapiro tweeted. “If made permanent, the OSHA rule would be far more onerous. They could push a national vaccination AND mask mandate.”

Not a shock that tyranny in the United States comes in the form of an anodyne-sounding administrative agency.

Daily Wire said the Biden vaccine mandate seeks to force it to invade employees’ medical choices or histories and their religious beliefs in connection with a condition of employment.

Shapiro stressed the lawsuit is neither about the efficacy of the vaccine nor his opposition to it.

This isn’t about whether vaccines are good. There is no bigger fan of vaccines than I. This is about whether Americans ought to have liberty, or whether administrative tyranny ought to rule our lives. This fight on behalf of the liberty of our employees is expensive and time-consuming. We truly need your help.

And then the hammer — strong language.

Everyone in America has had the ability to get the vaxx. Now leave everyone the f**k alone.

“Employees are not children. Employers are not parents,” tweeted Shapiro. “And the United States government must not be an administrative dictatorship.”

Daily Wire admonished Senate Republicans to take the battle to their Democrat colleagues — and also urged readers to hold their senators accountable.

As noted by The Wall Street Journal, the Biden vaccine mandate will impact more than 80 million employees. And as we reported earlier, Biden on Wednesday made a veiled threat, seemingly linking the vaccinating of kids with keeping schools open.

America being sick and tired of Joe being Joe.