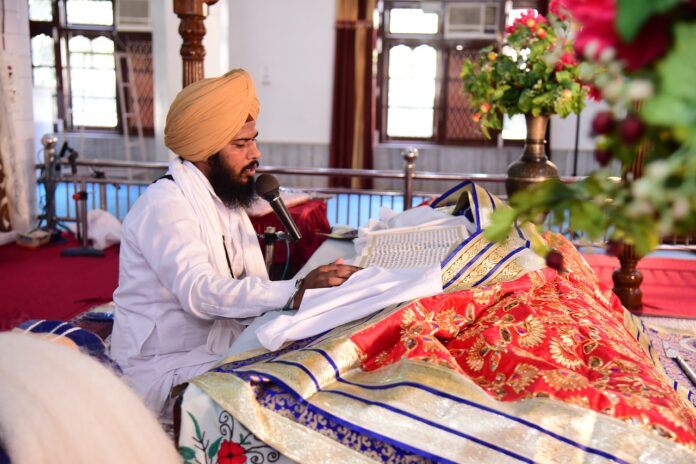 Sikhism is a monotheistic faith that was founded in India’s Punjab region over 500 years ago. With roughly 25 million followers it hails as the world’s fifth-largest religion, with approximately 500,000 devote worshippers residing in the US.

Because it is the custom of Sikh men to adorn their heads with turbans, oftentimes Sikhism mistakingly becomes the target of Muslim-fueled hatred. But they are peaceful people who wish no ill-will on anyone and they do not praise Allah, the false god of the Muslim holy koran.

Ajeet Singh, a member of the Sikh faith and an employee at the Indianapolis FedEx facility where eight workers were just recently gunned down for motives as yet unknown, had to force himself to go back to work. Of the eight casualties, four were members of the Indianapolis Sikh community which numbers a hefty 500,000 residents.

“I’ve been scared to go back,” he said. “I don’t know why this happened still. Was it random, or was it because of who I am?”

Because the Sikh group is extremely tightly knit, collectively, they are all feeling the sting of the latest FedEx incident. They have suffered immense bias and violence for decades in the US and they’re saying it’s time for it to halt. More must be done. Of course, educating their neighbors regarding their misunderstood faith is a good place to start, but it’s only the beginning.

The Sikhs are calling for tougher hate crime laws, and with the verdict of the Derrick Chauvin trial not working out so well in the ex-cops favor, tougher laws are bound to follow. They just want to be recognized and included as a way of getting the word out concerning who lies below those covered heads.

One way the Sikh community is trying to curb the rise in hate-associated violence is by directing their grief toward the enforcement of tougher gun control laws. However, this is one old horse that’s been beaten lame thousands of times over to no avail. In keeping with the education theory, it would be far wiser of them to invest their money in buying some air time, but this is their call to make, so…

Executive director of the Sikh Coalition in New York, Satjeet Kaur, said “We are time and time again disproportionately facing senseless and often very targeted attacks” Kaur, among other Sikh leaders, are urging investigators in the FedEx shooting to consider bias as a possible motive.

“The impact on the community is traumatic,” she said, “not just particularly the families that face the senseless violence, but also in the community at large because it’s community trauma.”

The Sikh coalition arranged a call between the Indiana leaders and the White House Office of Public Engagement, where several requests were made of the federal officials. First and foremost, they asked that a member from their own community be involved in the investigation to assure it’s done thoroughly, and to prevent any possible coverup.

Last year in Denver, after telling a Sikh man and his wife to “go back to their country,” the angry motorist plowed into the man who later died from his injuries. The man was charged with attempted murder, along with 16 other counts, one of which was being found guilty of a hate crime.

Rana Singh Sodhi, a Sikh Indian immigrant residing in Arizona, lost his brother when he was shot dead following 9/11 by a guy who thought he was a Muslim after spotting his turban. Since then, Sodhi has devoted his life to preaching love and tolerance to anyone who will listen.

The aftermath of 9/11 had the Sikh community hiding in their homes out of fear of retaliation. The death of Balbir Singh Sodhi was but the first of an avalanche of hate crimes to follow. They continue to this day.

The mistaken identity of Sikhs as Muslims is unfortunate. They have several viable options to help curb the hate crimes they continue to fall victim to, but gun control certainly isn’t one of them. A killer is a killer, is a killer, and they’ll find what they need to accomplish their mission, regardless of what the Sikhs or the liberal Biden administration think.

Perhaps the political buttwipes in D.C. should assist the Sikh community in making their presence better known as a peaceful law-abiding group of folks instead of focusing on guns. Or, maybe the men of the faith should consider trashing their turbans. Considering how they’re being targeted and all, their god should get that and be okay with it.

What’s your solution? How would you handle this?