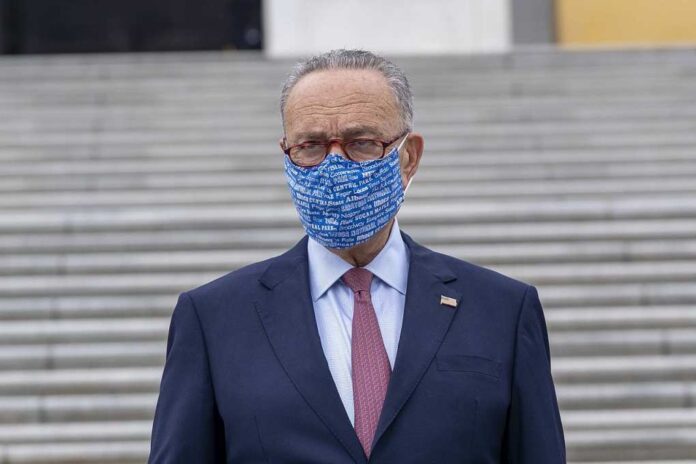 Federal law states that marijuana is illegal. It’s why dispensaries often work without the use of credit cards and bank transactions since those are operated by the U.S. Treasury.

Although many states have legalized marijuana for recreational purposes, there are still states where it’s illegal.

It’s for the federal tax money that could come of legalization.

Countless studies have shown that marijuana is a gateway drug. There’s already a drug addiction problem across the U.S. Increasing access to the drug is going to cause more people to become addicted not only to marijuana but to other and more dangerous drugs.

However, that’s not Schumer’s concern. He’s more interested in the tax dollars. Oh, and when it’s legalized on a federal level, it also means that fewer people will be arrested. Those who are already in prison for marijuana possession and sales can be released. Who cares if it used to be a crime? It isn’t now…and that will release countless criminals onto the streets.

The top Democrat is eager to turn 4/20 into a federal holiday as he fights to end the federal prohibition on marijuana.

April 20 has already become the day that pot smokers celebrate the recreational drug. “420” has become a term that is synonymous with marijuana. It is code among police officers. It is also code among many who want to designate certain activities. The history is hazy, but it is believed that kids in San Rafael, California used “4:20” as a way to search for abandoned cannabis crops in 1971.

As April 20 hit the calendars, social media lit up as people showed off all of their paraphernalia. Some showed the various strains they purchased at dispensaries while others talked about their plans to eat edibles or get high with friends.

On the Senate Floor, Schumer stood to say, “Today is what you might call a very unofficial American holiday: 4/20.”

Encouraging Americans to get high and celebrate the “unofficial” American holiday seems uncharacteristic of a politician. Yet, this isn’t just any politician. Schumer is a liberal who will use any excuse to release criminals and make it easier for society to grow dependent on the government.

Is Schumer himself looking for a way to smoke pot legally? Perhaps he’ll bring in some joints for his fellow Senators. He simply must be high to think that such a proposal is a good idea.

He believes that the drug laws have had a disproportionate effect on people of color and that there needs to be a comprehensive reform effort. He goes on to say that young adults “have been arrested and jailed for even carrying a small amount of marijuana.”

He doesn’t seem to understand that the reason that people are affected by the drug laws is that they’re choosing to break them. Carrying marijuana, even a small amount, is illegal.

What’s next? Is Schumer going to find it acceptable to walk back every other law that would cause people of color to be arrested? What about rape? Murder? He’s setting a dangerous precedent…

Meanwhile, as he pushes to change the way that marijuana is dealt with, he continues to fight the GOP when there’s a push to provide more funding for mental health.

Those who suffer from mental health are more likely to turn to drugs. Then, it’s not only a mental health issue but also a drug addiction. Schumer might as well start a vending machine business to make it easier for people to get their hands on a gateway drug like marijuana.

And, if Schumer is successful, April 20 may become an official American holiday. Let’s light up and watch the end of American society as we know it.