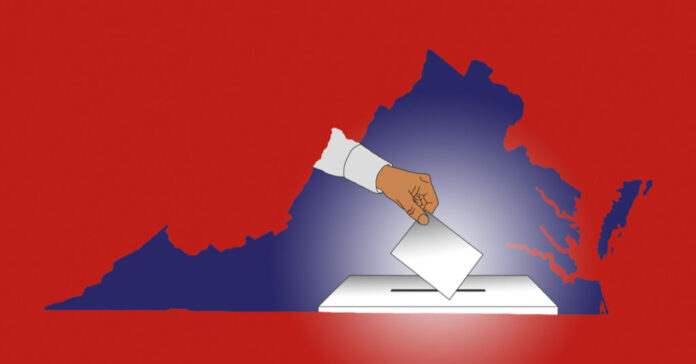 All eyes are on Virginia as an out-of-control political wildfire rages through the state. Republican Glenn Youngkin and Democrat Terry McAuliffe have squared off and touched gloves for the final fight in a match that could go either direction. The winner will be determined by a knockout, with the one left standing assuming the title of Virginia’s state governor.

Both of the hopefuls are crisscrossing separate trails around the state, vying for additional support as the final battle draws near. Both paths will respectively take them into Richmond, Roanoke, and Virginia Beach where each will express the importance of the upcoming election.

The results of this election will serve as a precursor for next year’s midterm, which will determine which direction the state is leaning and which party has their work cut out for them. Virginia’s 13 electoral votes are nothing to sneeze at, nor is its number of delegate seats.

McAuliffe still pulls a lot of clout after having previously served as Virginia’s Democrat governor from 2014 to 2018, but as Republicans in the state recall, his one-term performance was lackluster at best. Republicans haven’t won a statewide election since 2009, but they remain optimistic that all of this about to change.

State Democrats are eyeing the close race as a disaster in the making. McAuliffe still holds on to a slight lead but Youngkin is whipping his horse hard and catching up fast, so at this point, it’s still anyone’s race.

The Republican candidate has been rolling into prayer breakfasts, BBQs, and meet and greets, at every stop along his way, all the while collecting more moss. At a rally, he said things are looking pretty good. So good, in fact, Youngkin made the prediction that Republicans were going to reclaim all 100 seats in the House of Delegates, which are also up for grabs on the ballot.

“This is a moment for us to make a statement,” he said, “that big government control is going to lose and liberty and freedom in Virginia are going to win.” The crowd immediately erupted into ear-shattering cheers.

Virginia is the only state in the nation that doesn’t allow its governors to serve consecutive terms. They get one shot at it unless they wait four years and give it another go, so this is more or less a comeback tour for McAuliffe. Since ticket sales don’t do as well for has-beens, his slight edge is only due to his being the only option for the libs who’ll vote for a chimpanzee to keep a Republican out of office, i.e., Joe Biden.

Fortunately, there’s such a thing as moderate Democrats who still cringe at new-age liberal hocus-pocus, but they’re dwindling in number. Why? Because they’re switching sides. Their beliefs and morals have become more closely aligned with the Republican agenda as the left wanders further into a transcendental state of la-la land. And they like what Youngkin has to say way more than they dislike what they’ve already seen McAuliffe do. Or not do as is the case.

McAuliffe may be pulling out all the stops but it’s a dog and pony show with no substance. He hired Dave Matthews and Pharrell Williams to sing tunes at a rally, got Barack Obama to show up at one, and talked crazy Joe into endorsing him. Youngkin, on the other hand, is telling crowds what he’s going to accomplish and how he’s going to get it done. He’s been adulting.

Another one of Virginia’s oddities is that voters don’t register by party. Since this makes it a bit more difficult in terms of projections, both candidates are claiming they’re going to sweep the state. But talk on the streets and around Virginia’s political community say it would be wise to plan for a regime change, and this is where the truth usually lies.