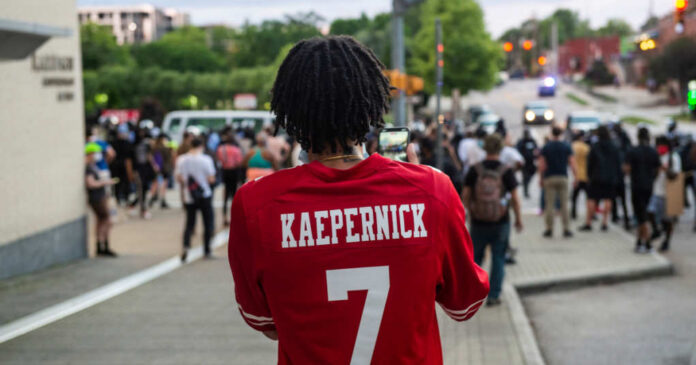 Jack Brewer, a former NFL player, didn’t mince words in talking about Colin Kaepernick during an interview on Monday. Brewer had some harsh words for the former NFL player turned left-wing activist. Brewer said that Kaepernick’s message to young black men in the U.S. is poison.

Fellow NFL player, Jack Brewer, played for the Minnesota Vikings, the New York Giants, the Philadelphia Eagles, and the Arizona Cardinals. He maintains that Kaepernick’s comments were harmful to minorities.

“This new Colin Kaepernick doctrine that’s penetrating the minds and hearts of so many of our underserved black kids across America is the single largest threat to black men in the United States of America,” Brewer told Fox News.

In his documentary Colin in Black & White, Kaepernick compared the NFL’s player selection meeting to slavery.

There is a clip from the new special, which was released on October 29, where Kaepernick says that what coaches and scouts don’t want players to understand is that the NFL Draft and training camp establishes a ‘power dynamic’.

He said that before they put you on the field, teams poke, prod, and examine you searching for any defect that might affect your performance. “No boundary respect,” Kaepernick said. “No dignity left intact.”

There was even one scene showing players being paraded in front of coaches and scouts before they are seen in shackles on an auction block.

Jack Brewer went on to describe that many people right now are thinking that they are victims when they are living in a most prosperous time. They are in a country with the most opportunity in the world.

Kaepernick earned an average annual salary of $19 million in the NFL. He became a controversial figure in the league in 2016 when he started kneeling during the playing of the US national anthem. His actions were to protest police brutality and racial injustice while playing for the San Francisco 49ers.

Brewer said, “And so this one hurts me because every day I get up, and I go out and try to help young African American boys become men, and try to instill those values. And when you have someone like this, who has the audacity to call multi-millionaires ‘slaves’ and compare a process of someone living their dream, going to the National Football League, comparing that to slavery, it’s gone over overboard.”

Brewer thinks that Colin Kaepernick needs to do some soul searching. He said when he watched Kaepernick’s video on Netflix, he saw how dark it was. He said that many who will watch it are the most fragmented and the most vulnerable population in America. They will be kids of whom 70% don’t have fathers, they have reading and math proficiency levels that rate alongside of third world countries. He said they are a population who are already hopeless and now Kaepernick is pushing this mentality on them, someone who is supposed to be a leader.

Brewer looks at the movement that Kaepernick has started and the opportunity that he has. He could actually be a force that promotes positivity to young black and African American men. He could tell them how great this country is. But he doesn’t have that spirit. In fact, Brewer declared that he has an evil anti-American spirit, “It is sick and disgusting to think that,” Brewer said.

Brewer wasn’t the only one to criticize Kaepernick’s comments. As the clip from the Netflix special went viral, the athlete was blasted on social media.

One social media critic wrote that Kaepernick was the “lowest of the low.” That he was putting out racially-divisive bs that was manufactured. Another user said that anyone who is still defending “This imbecile lacks a functional brain.”