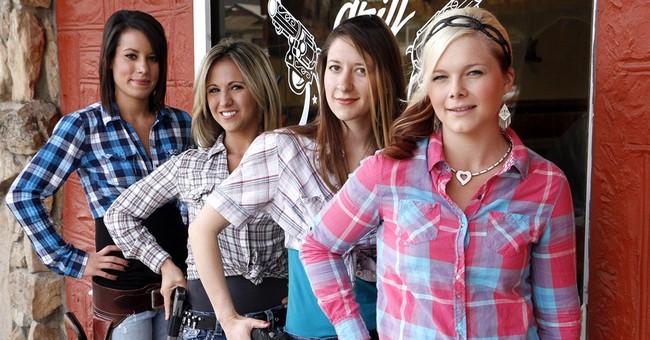 This morning, while most of us were reclining on one elbow and enjoying a cigarette and perhaps a warm, damp washcloth in the post-election afterglow of the Glenn Younkins, Winsome Sears, and Jason Miyares sweep of Virginia’s elections, the Supreme Court heard arguments in the first major Second Amendment case to make its docket since McDonald vs. Chicago in 2010. This is not because the Second Amendment hasn’t been under siege but because Chief Justice John Roberts has shown scant interest in treating the Second Amendment as anything other than a curious artifact of our history.

Finally, a good case has been accepted for argument, and the day did not go well for the gun grabbers.

The case comes from New York and is called New York State Rifle & Pistol Association v. Bruen. This is a thumbnail sketch of the issue. For 108 years, the state of New York has severely curtailed the ability of ordinary citizens to carry concealed weapons outside their homes. New York follows what is called a “may issue” standard for obtaining a license to carry your weapon. What that means is that to carry a firearm outside your home, you must convince some state apparatchik that you have a “proper cause” to do so. If you live in a socialist sh**hole, such as I do, that means that it is virtually impossible to get a concealed carry permit for any reason other than you routinely carrying large amounts of cash and makes the Second Amendment a legal fiction.

The New York law at the center of the case resembles gun-control measures in several other states, including California, Hawaii, Maryland, Massachusetts, and New Jersey. Many cities also have similar restrictions. It requires anyone who wants a license to carry a concealed handgun outside of the home to show “proper cause” for the license. Courts in New York have defined “proper cause” to require applicants to show a special need to defend themselves. For instance, a person who has been the target of recurrent physical threats likely would qualify. But a general desire to protect oneself or one’s property is not enough to obtain an unrestricted license to carry a concealed handgun. (New York generally does not allow “open carry,” the practice of carrying unconcealed guns in public.)

The challengers in the case are a gun-rights advocacy group and two men, Robert Nash and Brandon Koch, whose applications for a concealed-carry license were denied. Both men, however, were granted a “restricted” license that allows them to carry a gun outside the home for target shooting and hunting. Koch is also allowed to carry a handgun for self-defense while traveling to and from work.

Nash, Koch, and the advocacy group went to federal court to challenge the ban on carrying handguns without a license. They also challenged what they view as the overly draconian “proper cause” requirement. The district court granted the state’s request to throw out the lawsuit, and the U.S. Court of Appeals for the 2nd Circuit upheld the dismissal. That led the challengers to come to the Supreme Court, which agreed to decide whether the state’s denial of Koch’s and Nash’s applications for a license violated the Second Amendment.

Here are some highlights from the hearing via the Washington Post.

The main arguments of the left seemed to revolve around the fear that New York was much more violent than the 41 “shall issue” states.

Justice Stephen G. Breyer pressed the attorney for the two gun owners about how the court could craft guidelines that would not lead to “gun-related chaos.”

Breyer suggested that even people of “good moral character” who had consumed a lot of alcohol at a football or soccer game could end up getting “pretty angry at each other.”

If those people were carrying concealed weapons at sporting events, he said, statistics show that “a lot of people end up dead.”

Breyer’s hypothetical is just nonsense from two levels. First and foremost, he is not a legislator. He should not be concerned about how to “craft guidelines” that would justify when a citizen can exercise their Constitutional rights. Second, most of the nation already has the regime the plaintiffs are seeking to impose upon New York, and there are no mass shootings at sporting events.

Kavanaugh hit home with his concern that the exercise of the Second Amendment, under New York’s system, will be left to the whim of the person reviewing a permit application.

Justice Brett M. Kavanaugh acknowledged that there is a history of states issuing permits for the open carrying of guns. But “how do we think about,” Kavanaugh asked U.S. Deputy Solicitor General Brian H. Fletcher, “a separate tradition, that the chief justice and others have referred to in our constitutional law of concern, about too much discretion in exercise of authority over constitutional rights and that too much discretion can lead to all sorts of problems, such as our history shows.”

“It seems like before you impose more restrictions on individual citizens and infringe our constitutional rights based on this theory, you should have to show” that those other states have “a lot more accidents, crime, and I don’t see any real evidence of that,” Kavanaugh said.

I’d argue that it goes even further than that. Wealthy people can employ lawyers to write their applications and lobby agency officials for a favorable decision. The rest of us? Not so much. This is why you always see celebrities with armed bodyguards swanning about the most gun-restrictive jurisdictions in the nation. There is one law for them and a very different one for us.

For once, Chief Justice Roberts seems to be on our side.

Chief Justice John G. Roberts Jr. pointed out that constitutional rights do not have to be justified, such as the Second Amendment right to bear arms. “The Constitution gives you that right,” Roberts said. “And if someone’s going to take it away from you, they have to justify it.”

Brian H. Fletcher, the principal deputy solicitor general arguing in support of the New York law, said: “The whole question is whether the Second Amendment right to keep and bear arms confers that right to have a pistol with you for self-defense. Even absent a showing of demonstrating need.”

Roberts responded: “I’m not sure that’s right. I mean, regardless of what the right is, it would be surprising to have it depend upon a permit system. You can say that the right is limited in the particular way, just as First Amendment rights are limited. But the idea that you need a license to exercise the right, I think, is unusual in the context of the Bill of Rights.”

When Roberts stops trying to be Mr. Congeniality and focuses on the subject at hand rather than the next WaPo column threatening to pack the Supreme Court, he can be awesome. This was one of those days. Unfortunately, there are far too few of them.

While Kavanaugh and Roberts may have made the intellectual arguments, Alito went for the gut-punch.

Justice Samuel A. Alito Jr. raised the issue of everyday self-defense on the streets of New York. “Could I explore what that means for ordinary law-abiding citizens who feel they need to carry a firearm for self-defense?” Alito asked.

He raised the issue of people who work late in Manhattan, may have to walk through a high- crime area to get home and are “scared to death.” He queried: “They do not get licenses, is that right?”

“That is, in general, right,” New York Solicitor General Barbara Underwood said. “If there’s nothing particular to them.”

“How is that consistent,” Alito responded, “with the core right to self-defense, which is protected by the Second Amendment?”

Underwood answered, “Because the core right to self-defense doesn’t, as this court said, doesn’t allow for all to be armed for all possible confrontations in all places.”

?There are a lot of armed people on the streets of New York and in the subways late at night right now. Aren’t there?” Alito asked. “All these people with illegal guns, they’re on the subway, they’re walking around the streets. But the ordinary, hard-working, law-abiding people I mentioned, no, they can’t be armed.”

Over at Bearing Arms, they note that the left is reading the tea leaves the same way (see WaPo: Looks Like SCOTUS Is Going To Strike Down NY Carry Laws and Gun Control Activists Already Game Planning SCOTUS Loss),

On the whole, the day went very well for demolishing this example of New York’s anti-gun extremism. The left tried to sidetrack the argument onto the subject of what kinds of regulations should be cover weapons at sporting events and the like, but the majority seemed to agree that this fine-tuning should be left for another day…a day after New Yorkers and those citizens in other anti-freedom states can carry a concealed weapon for any reason or no reason at all.