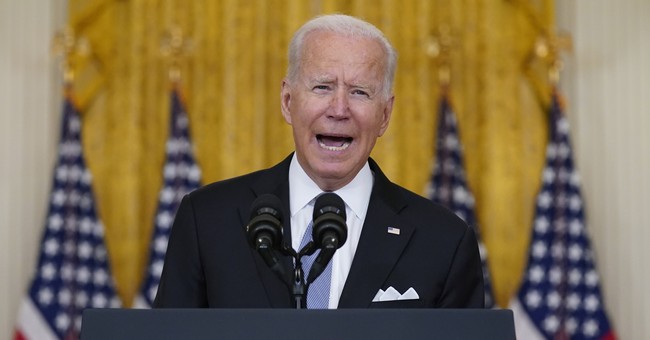 Earlier today, there were no events scheduled for Joe Biden nor the White House press team. Yet, the president surprised everyone by emerging this afternoon to answer questions. That went about as well as you’d expect, with him taking inquiries on the Virginia election and his policy woes.

In what can only be called a shaky performance, Biden began coughing uncontrollably at one point, claiming that he “swallowed” wrong.

But we aren’t here to talk about Biden’s less-than-peak physical and mental condition. Rather, what was more interesting was how he chose to respond to the absolute shellacking the Democrats took last night, not just in Virginia, but across the country.

Of note is that turnout was extremely high yesterday. There is no evidence people stayed home as a result of fears involving the coronavirus. Biden didn’t stop there, though. He also talked about the price of gas and worries over schools being issues that affected the race. He’s actually right on those points, but he takes the completely wrong lesson from it all.

Instead of recognizing that it is his policies that have caused the current mess that is affecting so many Americans, he claims that Democrats just need to pass his “Build Back Better” agenda as an antidote to last night’s losses. Given that inflation remains a top concern and Biden’s approval is in the toilet, the idea that they just want the president to “get things done” flies in the face of reality. I’d suggest most Americans would much rather he return to the basement and just get out of the way.

But like a broken record stuck skipping on the same word, Biden eventually got to his real excuse: Democrats just need to message better.

The problem is not confusion. Americans understand exactly what Biden and his cohorts are doing and are trying to do, and they don’t like it. That’s the entire reason you got the results you got yesterday. Instead of admitting that a change of course is necessary, Biden is content on doubling down on failure. That’s good for Republican electoral chances next year, but it’s bad news for the country in the meantime.

Lastly, Biden would respond to accusations that he keeps talking about Trump too much. This was his nonsensical answer.

Good luck deciphering that. How are Donald Trump’s policies affecting Americans today if Joe Biden is president? Has Biden just kept Trump’s policies and I’m unaware of it? Besides, what Trump policies is he talking about that are leading to negative outcomes? That’s an answer you’ll never get because one doesn’t exist. It’s crystal clear to everyone paying attention that the economy is faltering and the border is in crisis because of Biden’s decisions, not because of anything the former president did or didn’t do. He can’t run from that truth no matter how hard he tries.

In the end, we are witnessing a man with no message, no leadership ability, and no way out from the corner he’s painted himself in. Self-reflection is not a skill Biden possesses so you can expect the doubling down to continue, and with it, the electoral losses for Democrats.