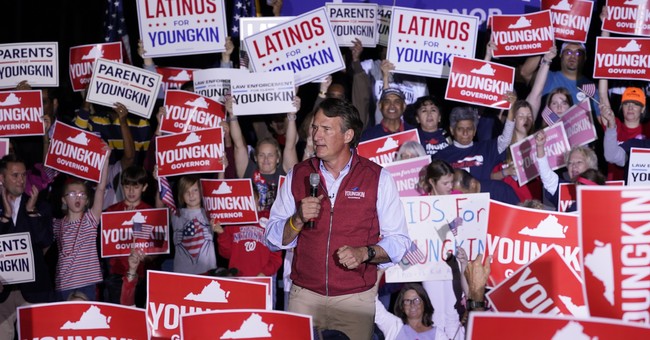 Last night, Glenn Youngkin set off an electoral earthquake. In a race that Terry McAuliffe was supposed to win comfortably in Virginia, the Republican triumphed. Not only that, the GOP swept the three statewide offices, including the election of Winsome Sears, to the office of Lt. Governor. It appears Republicans will also take the majority in the House of Delegates.

In a more sane world, this would be a day of reflection for the left. Did they push their insanity too hard? Was their messaging off in regards to race and parents? Can they win going forward with such a limited coalition of the woke?

None of those questions are being asked and answered, though. Instead, the meltdown had begun, and that includes doubling down on what cost them the election in Virginia.

Yes, please continue to call concerned parents racists for wanting to protect their children from the dangerous predations of far-left ideologues on school boards. I’m sure that’ll deliver victory in 2022 and beyond.

Of course, you can always count on MSNBC to make things about January 6th. Nicole Wallace had some kind of mental seizure on air after it became apparent Youngkin was going to pull the upset.

There’s something especially hysterical, and I mean that both literally and ironically, about the fact that Democrats simply can not understand that our “democracy” is not and was not ever on the verge of collapse. While normal Americans are worried about the economy, rising prices, and rising crime, left-leaning news networks have obsessed about a three-hour moment of unrest that in no way qualified as an “insurrection” or “coup.” The majority are not buying it anymore.

Further, Youngkin did not win because of “dog whistles” (which apparently only leftwing maniacs can hear). He won because he spoke to the issues most Virginians care about. While McAuliffe just kept saying the word “Trump” over and over, Youngkin settled in with a completely local campaign. He didn’t bring in out-of-state actors to try to bolster him at the last minute. He blitzed the state, did rallies, and focused like a laser beam on parents, the economy, and COVID-19 (specifically the overbearing mitigation to it). That’s why he won, not because of “white supremacy.”

But the Democrats just can’t help themselves. They sit atop their self-defined throne, sneering at what they see as the little people. When you don’t bend to their will, they just get more vicious, and that’s exactly what will happen going forward. Instead of cooling it with the charges of racism, they will only scream them louder. Zero lessons have been learned, and that’s excellent news going into 2022 if you are a Republican.