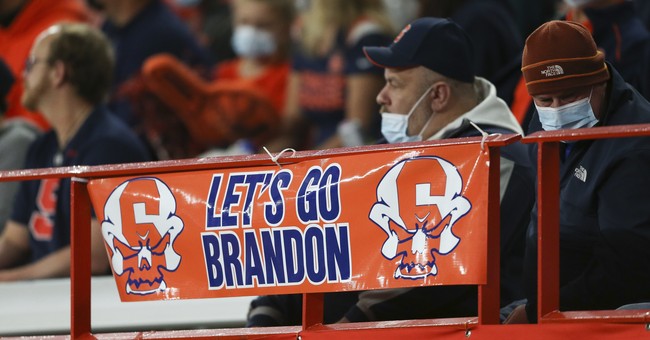 The hysterics seen from the press over the Let’s go, Brandon movement have completely exposed their weakness.

Despite the pandemic shutdowns, the confiscatory inflation, and numerous other oppressive factors visited upon the gentry the American rebellious spirit is still in effect. Yes, there have been a number of things initially out of our control, but as the government — both at the federal and state levels — has been striving to acquire more control we are seeing signs of significant pushback.

The mask and vaccine mandates are causing resistance. Biden trying to purchase Presidential success with $3.5 trillion of our own money is not paying off. School boards and teachers’ unions who are accustomed to rubber-stamping agendas are being met with anger and direct challenges. Then, in numerous avenues of our lives, an ever-growing tide of citizens are gleefully chanting an innocuous three-word phrase of protest against the government and the media complex in this country are losing their collective minds.

The very basic chant of “Let’s go, Brandon” is still evolving before our eyes, going from a humorous result of resistance to a battle cry, and it is in the process of shifting again, now becoming both something of a societal litmus test as well as a verbal crucifix of sorts towards any with blind fealty to the government. The first portion is a way of gleaning those in the populace who are likewise fed up and taking up a stance together. The other is a way of exposing who are the devotees of the status quo statists; of this latter group the members of the journalism class are firmly entrenched.

Over just the past few weeks the rising volume of opposition to those employing the Brandon chant has reached shrieking levels. More and more we are getting delivered reports about how obscene this phrase is, how inappropriate it is to be spoken in polite company, and why this is among the greater crimes we have seen perpetrated in political circles. That those who are wailing the loudest from their newsroom fainting couches were completely mute over the past four years of vulgar retorts hurled at the White House is just the beginning of the exposure.

One of the clearest signs that the journalists are completely beholden to the government is seen in the reactions from just the past week. There were aghast reactions when select members of Congress dared utter The Phrase That Must Not Be Spoken. The supposed outrage over an airline pilot saying it on a loudspeaker was entirely generated by an Associated Press reporter. Yesterday, NBC correspondent Ken Dilanian needed smelling salts after he learned a weapons manufacturer was printing the phrase on internal gun components.

More than just their outrage at this impolite stance towards the authorities, look at what took place in each example — the aggrieved journalists ran to the government for accountability. They called on Congressional leaders to punish those responsible, they declared the FAA should take action, and Dilanian called the Secret Service to report a threat against the president. All because people used a three-word phrase. Here are the supposedly empowered media members calling on the government to step in and squelch the commoners — the same journalists who turn ashen any time someone dares suggest they are the enemy of the people.

But what angers — nay, frightens — these journalists the most is that this simple comment spoken aloud and broadly is completely neutering their station in this country. This is because with a scalpel’s precision it eviscerates all the efforts they have made this year in support of Biden and the government. That the phrase derived from a member of the media makes it all the better, but here is why it works.

Joe Biden is being propped up now more than a prefab warehouse wall during construction. His failures are ignored, his leadership meanderings recalibrated, and his mental faculties eroding are wallpapered over. The best tactic the media has in shielding Biden is not covering him at all. This is why on any given day we are more apt to hear about the former President than we are the septuagenarian setting off Amber Alerts in the East Wing. Trump makes for the best possible distraction away from reality, and Brandon is ruining it for all of the journalists.

Look at what the press has to avoid today. They pretend the border crisis is done and not a continuing quagmire. Afghanistan has all but been forgotten, despite the nightmare visuals and Americans still trapped therein. Inflation is going from being a painful reality to being a crippling one. If anyone is not noticing the rising prices it is because goods are not even available due to the supply chain fiasco. And the man who pledged to end the pandemic has now presided over more COVID deaths than seen last year, and that is after being granted three vaccines to battle the scourge.

Yet the press is not completely overcome with amnesia. While they draw a blank when any of the above topics are brought up they will go into verbal overdrive if someone is foolish enough to bring up January 6. But as soon as “Let’s go, Brandon” is spoken, all of the harsh realities of Biden flood into the foreground. The press is helpless, as they want the focus on an event that predates the current disaster, telling us that we should care about an overhyped episode rather than the realities which affect us directly. Brandon sweeps the desk of their distraction and brings the real problems into focus.

This is why the journalists screech so loud, and it is the making of their own failure. Their insistence that people stop using what they deem to be a vulgar term only provokes that American rebellion to come out. Oh, the media who resent us are displeased with our new catch-phrase?! That only means we’ll use it more, then. That leads to needing to explain it to others, and this draws in more like-minded resistors. The press attempting to tamp down the outbreak is creating a variation of The Streisand Effect, only provoking its use to broaden and take root.

Telling Americans their innocent words are obscene provokes mockery. Dilanian reporting to the Secret Service is ludicrous considering the raft of legitimate threats we saw go ignored under Trump. Crying about Congress saying “LGB” falls on deaf ears after these same wailers were applauding Rashida Tlaib and her calls to “Impeach The Mother F–er.” A fantastic example of how oblivious these complaints get is from CNN’s Jim Sciutto. He made the lame attempt at shaming the right, in the name of the genteel sensibilities of our fragile youths.

Sorry, Jim, this is a laughably inept attempt, considering it comes from one member of the same network that celebrated a teen girl recently for flipping off a group of mask mandate protestors.

The press is compounding the very challenge they wish to curtail. The effort by them is to control the narrative and degrade the general public into obedience. Brandon is out of their control, and the more they attempt to silence the rebellion the more notice they provide for it in the public eye. A trend that may have faded organically a week or so ago is given fuel by those wanting it to end.

These high-minded elites are attempting to shame those saying “Let’s go, Brandon” by loudly saying it is a sign of incivility. What the dolts in the press do not understand is that is precisely the point. It is a sign of civil unrest. That it angers these scolds in the media makes it all the more enjoyable.