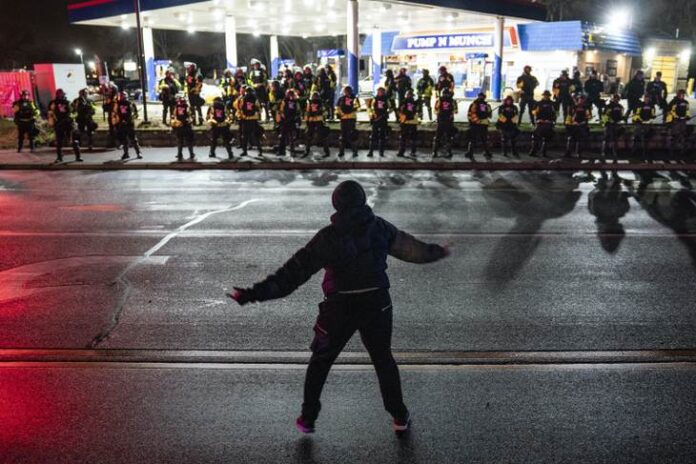 This is the sort of headline that you are not going to come across on an everyday basis. Brooklyn Center, Minnesota has been the site of constant violence and nightly protests for the past few days. The police-involved shooting of Daunte Wright has led to a great deal of controversy.

Everyone is dealing with it in different ways. The Associated Press has shared the story of an “elite security unit” that looks to keep distance between rioters and police. The group is comprised of mostly black citizens who are armed and wearing body armor. The group refers to themselves as the Minnesota Freedom Fighters.

The group has a militaristic look to them but they are claiming that their intent is a simple one. They want the protests to remain peaceful and they are willing to do whatever it takes. Of course, their presence is not always welcome, which is another point of contention. The Associated Press has more:

“As protests intensified in the Minneapolis suburb where a police officer fatally shot Daunte Wright, a group of Black men joined the crowd intent on keeping the peace and preventing protests from escalating into violence…

The Black men at the edge of the crowd wear yellow patches on protective vests that identify them as members of the Minnesota Freedom Fighters, a group formed to provide security in Minneapolis’ north side neighborhoods during unrest following the death of George Floyd last year.

They are not shy about casting a forceful image — the group’s Facebook page features members posing with assault-style weapons and describes itself as an “elite security unit” — but on Friday the Freedom Fighters didn’t appear to be armed and said they intended only to encourage peaceful protesting.

As several people began to rattle a fence protecting the Brooklyn Center police department, the Freedom Fighters communicated to each other over walkie-talkies. They declined to say how many are in their group,” the report shares.

Liberal commentators think that this idea is the bee’s knees. They believe that the country is going to have a collective freak out when they see a group of armed black people roaming the streets. On the other hand, we do not view this as a bad thing on its face. None of these Freedom Fighters are said to be unlicensed firearm owners and they are doing what they can to keep crowds from attacking the officers who are on hand.

Now, before we decide to say that this is a job well done, we need to take a trip back to last year. When Kyle Rittenhouse was a part of an armed group that was looking to protect the businesses and officers who were at risk in Kenosha, Wisconsin, the media took a decidedly different view. “The sheriff told the Milwaukee Journal Sentinel that militia members or armed vigilantes had been patrolling Kenosha’s streets in recent nights…” said the Associated Press at the time.

This coverage is much different from the coverage that is taking place now. It doesn’t take a genius to notice the differences. “Reddit said Thursday it had removed posts that had urged vigilantes to go to the Kenosha protests. The company said in a statement its rules “explicitly prohibit content that encourages, glorifies, incites, or calls for violence.”

Kenosha County Sheriff David Beth said Wednesday that militia members or armed vigilantes had been patrolling the city’s streets in recent nights and asked about being deputized,” the AP continued at the time.

The media’s opinion on these things seems to shift in a fairly convenient manner, doesn’t it? While we do wish the Minnesota Freedom Fighters all of the best, we have noticed the difference in this reporting. For the sake of everyone in this area, we hope that their efforts can remain peaceful. Hopefully, the mayhem and destruction that is taking place right now in Minnesota can be kept to an absolute minimum by this self appointed group.