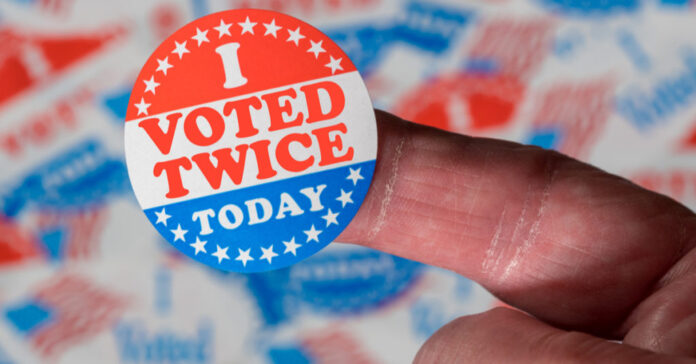 As much as the left would love to stop talking about the 2020 election, there are still cases of fraud allegations popping up across the country. After conducting a thorough investigation, Racine County Sheriff Christopher Schmaling held a press conference on October 28, 2021, to uncover the findings of his investigation, and they have left people stunned.

Uncovering an “unusual surge in voting activity” within the Wisconsin Election Commission pointed to their commission of voter fraud. Schmaling said, “Election statute was in fact not just broken, but shattered by members of the Wisconsin Elections Commission.” This all began after receiving a complaint from the relative of a nursing home resident. A resident with severe cognitive disabilities, yet still voted in the 2020 election via absentee ballot.

Racine County Sgt. Michael Luell investigated the matter. Upon this investigation, he discovered this unusual surge, as 8 of the 42 resident’s family members reported that their family members lacked the cognitive ability to vote, yet still cast a ballot. The Sherriff hopes that this leads to a further state-wide investigation into the issue.

“The law is being snubbed, it’s being disregarded…It’s called election fraud.” Sheriff Schmaling’s loss of confidence in elections is something being echoed across the country. Arizona has already done a review, and several other states have also held recalls as well. Wisconsin could also be the very tipping point the country needs as a whole to look into absentee voter fraud.

Now we have the allegations against Biden, and their entire response is to say it could never happen, or that this was the ‘most secure election ever’ despite numerous polling places reporting double ballots being cast across the country. People would fill out an absentee ballot, then show up on election day and vote again. These accusations have been screamed out from across the country, and largely fallen on deaf ears.

While these allegations may be difficult to prove beyond a shadow of a doubt, this case in Wisconsin may prove to be the key to opening Pandora’s box. With the number of nursing homes we have across the country, it certainly is within the realm of possibilities that many absentee ballots were filled out by someone else, and sent in on their behalf. Then, you have numerous other people who requested the ballot, never received it, and showed up to the polling place and claimed they never sent one in.

These allegations are incredibly dangerous and need to be taken seriously. If further voter fraud is uncovered, we could find ourselves in the need of a re-election, or Biden and Harris being removed from office. Needless to say, these are untested waters here, and how Congress and the House of Representatives could respond is uncertain. What is certain is that we could certainly see big changes coming with both absentee ballots and with in-person voting. Could this also possibly mean a move to online voting?