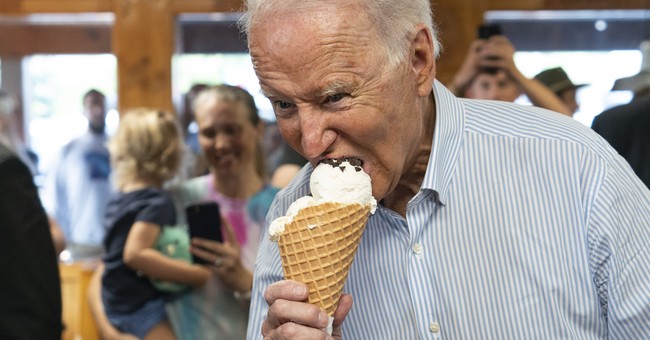 We’ve been covering a lot of the crazy reaction from folks on the left freaking out about “Let’s go, Brandon” — the meme criticizing Joe Biden that has gone viral across the country. My colleague Mike Miller encapsulates some of it very well in his latest piece about Dan Rather’s take.

Some of them are up in arms at the “vulgarity” of the underlying meaning. This is the same left who had no issue coming up with all kinds of vulgarity to sling at President Donald Trump.

But we may have the stupid award today for the worst reaction to “Let’s go, Brandon” right here.

Palmetto State Armory has put the saying on some of their AR-15 “LETSGO-15” STRIPPED LOWER RECEIVERS, along with “[email protected] Joe Biden.”

This completely has driven NBC’s Ken Dilanian wild. Check out this hysterical take from his “exclusive report” on the “dangerous way” gun dealers are marketing their products. They even claim — falsely — that these are “violent threats” against Biden.

Palmetto State Armory, which operates a 12,000-square-foot gun store in Columbia, S.C., the state capital, is marketing a “LETSGO-15 Stripped Lower Receiver,” which is a part meant for an AR-15-style assault rifle.

At least two other firms in other states, Culper Precision and My Southern Tactical, are advertising an AR-15 magazine for sale with a “Let’s Go Brandon” sticker.

The fact that this is on the weapons proves that the “rage that was on display on Jan. 6 has not subsided,” Dilanian claims on the video. Oh, please. That’s crazy and frankly, borders on the slanderous. There’s nothing connecting this company to that event. Liberal media like Dilanian — if they ever got journalism degrees — should just give them back and trade them in for their Democratic in-kind contribution stickers when they produce this kind of ridiculous “journalism.”

Once upon a time, reporters understood and actually cared about freedom of speech. Now they appear to think only about serving the Democratic power. Dilanian even personally called the Secret Service who declined to respond to him.

If the Secret Service had responded, they likely would have said to him — if they deigned to bother with him at all — “Are you daft? This isn’t a threat and we have real concerns with which we have to deal.” Dilanian apparently fails to understand that we’re not living under rules like in China — at least not yet — and these aren’t threats.

Dilanian also tried to provide cover for their own NBC reporter who was actually the cause of the “Let’s go, Brandon” saying. He explains how the saying began at a NASCAR race when the NBC Sports reporter was interviewing Brandon Brown and there was a nearby chant “that was difficult to make out,” Dilanian claims, so the reporter thought that’s what was being said. It wasn’t difficult to make out in the slightest as anyone can tell if they listen to the video.

But nice attempt there to try to cover for your reporter with such a deceptive claim. It was that media lying about the chant that made Americans turn it around and use it as an indictment of media lying as well as a criticism of Joe Biden. That’s a point that Dilanian completely misses while he’s slinging this bilge, proving the chant correct, yet again.

But in case Dilanian is interested, Palmetto also has a new product that’s a criticism of Joe Biden. Maybe he wants to call the Secret Service on them about this one as well. If he does, they will no doubt laugh him off the phone.