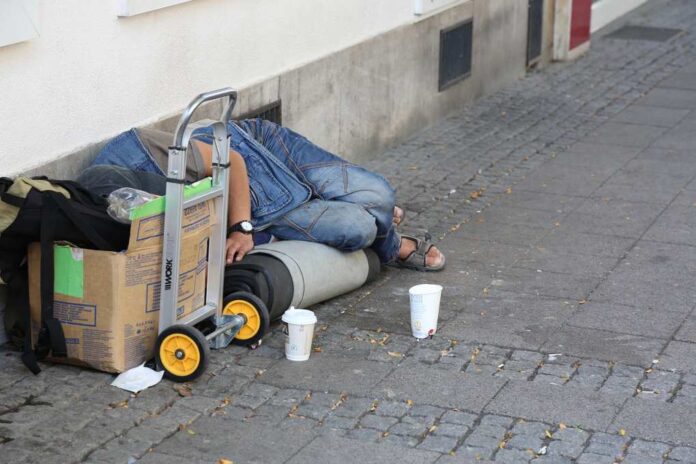 It was only last year that stories were told of feces running down the streets of Los Angeles. The homeless were literally defecating in the streets because they had nowhere to go. Tents can be found set up in virtually every major city of California. Yet, the Biden administration has decided to identify the liberal state as the model for homelessness.

On every account, California has failed to address the homeless problem. It’s completely out of control – and everyone knows it.

In one effort to address the problem, Governor Newsom moved homeless people into hotels – and then purchased those hotels. This was done during the pandemic when the hotels weren’t being used by tourists.

While it helped some of the homeless, millions more were left to stay warm under freeway overpasses and to set up a tent along the river.

The Biden administration, however, has decided that is the model that they’ll replicate. There is the belief that if they buy enough hotels, the homeless will finally be off of the streets.

And, Gavin Newsom is taking all the credit, boasting that Biden is adopting his state’s policies.

The California governor should hardly be boasting to anyone about his plan when there’s still a massive homeless population – and the numbers have been growing long before COVID-19 reared its ugly head.

Annual surveys have been interrupted because of the pandemic, so it’s impossible to say just how the homeless problem has increased. However, residents of major cities will quickly say that it is a continued problem.

If Newsom holds the solution to homelessness with the purchase of hotels, shouldn’t every homeless person be off the streets by now?

The state spent $800 million on a total of 94 projects that will become permanent housing for the homeless – many of which will have on-site social services. These transactions side-stepped a number of local rules – and it was a popular idea with Californians.

Unfortunately, the popularity of the project wasn’t enough to save Newsom from recall efforts.

The project, known as Home key, is hardly capable of solving homelessness. At best, Newsom made a dent in the decline of tent cities across the state. The high housing costs and the low wages will only allow the problem to be a temporary solution. The reality is that the housing affordability problem is crippling residents across the street. More people are falling into homelessness every day – and there simply aren’t enough hotels to solve everyone’s problems.

If the Biden administration is going to use this program as the model program for the homelessness problem in the United States, they’re not looking at all of the information.

Within the COVID stimulus bill passed earlier in the year, they provided $5 billion to state and local governments to fight homelessness – and that included funding to purchase hotels, showing that the CA model is now a federal policy.

So, the homeless may get off the street. But for how long? And how will their other needs be addressed, such as drug abuse and mental health?

There’s no way that the country can simply buy thousands of hotels to offer the homeless a place to stay. Will it be indefinite? Will there be requirements that the homeless individuals try to find full-time work? There are too many questions, and it’s a bailout that is only temporary.

Who decides who can move into a hotel and who has to remain in a tent? There are still not enough statistics to show if buying hotels is even fixing the problem. Sure, some have a roof over their head, but is that enough?

One report in the Times shared that the program is preventing COVID-19 from spreading through the homeless population. However, there is doubt on such a claim. COVID is spreading less outdoors, which would mean the homeless who are living in tent cities may be among the most protected.

It may be that the Biden administration jumped to conclusions. They should have waited to see what the real outcome of buying up hotels would be on the California homeless population.

It was just last week that the LA County Board of Supervisors nominated Dr. Drew Pinsky to head the local homeless commission. Dr. Pinsky’s view is that the issue isn’t really housing but mental health – and herein lies the key to fixing homelessness across the U.S.

Let’s not place California on a pedestal yet, especially when millions are still calling a tent on the side of the road home.