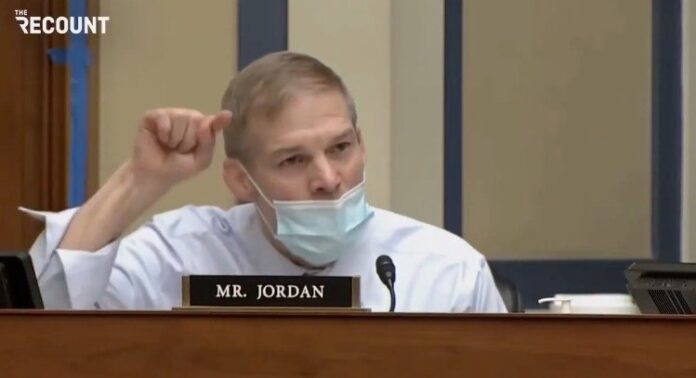 Dr. Fauci has been allowed to say whatever he wants over the course of the past year or so. Whenever he is confronted by his own statements and asked to provide more background, he always seems to struggle. When Congressman Jim Jordan finally got his chance to rip into the doctor, he was not about to pull any punches.

The flip-flopping has gotten out of control. Dr. Fauci cannot provide anyone with a straight answer and it is getting tiresome. This is exactly what Jordan decided to attack him for and we are beyond glad. As the ranking member of the House Judiciary Committee, Jordan had the chance to put the screws to him.

“15 days to slow the spread turned into 1 year of lost liberty,” said Jordan. Of course, Dr. Fauci could not engage with what was being said. He is incapable of handling such things. He would rather talk around what is being said instead of offering up a straight answer.

This is how all of the overpaid bureaucrats behave. Dr. Fauci acts as if he is accountable to no one and it showed in the smart-aleck answer that he provided to Jordan. “I don’t look at this as a liberty thing, Congressman Jordan. I look at this as a public health thing,” he replied.

Dr. Fauci is not beholden to the citizens of this great country and he never will be. This is not a man who has to take any sort of oath. The Constitution is a mere suggestion to him, not something that he is expected to uphold. When you watch the video, it all becomes clear.

Rep. Jordan (R-OH) demands Dr. Fauci give him a date for the end of COVID mitigation measures:

“15 days to slow the spread turned into 1 year of lost liberty.”

He’s not ever going to provide us with a concrete date where we can return to normalcy. That’s where all of the hostility is stemming from. The American people are largely a decent sort who can go along with things when they make sense. At first, everyone rallied together to stay home and keep each other protected.

That’s all well and good at first but what happens once people are asked to maintain that philosophy on a daily basis for an entire year? Eventually, even the most kind and thoughtful person is going to want to move around in the manner that they hoped for.

You cannot expect people who are already at their breaking point after spending a year inside to commit to it for another year. Dr. Fauci is severely overestimating the American people if this is what he is expecting to happen. Jim Jordan was not about to let Dr. Fauci get away with this and he had the perfect response to him.

Rep. Jordan: “Here’s how it works, Dr. Fauci. I get to ask you the questions.” pic.twitter.com/7ufdQ65zG8

“Are we gonna be here two years from now wearing masks …?” Jordan asked. Dr. Fauci could have provided him with a straight answer at this time and chose not to. Instead, he tried to deflect and he told Jordan that he was ranting. That’s when Jordan broke out the reply that he has probably been waiting to say for months now.

“Here’s how it works, Dr. Fauci. I get to ask you the questions,” he crowed. This is the truth. Dr. Fauci is not used to being in a situation where he does not get to call the shots. The video is a great watch, as it gives us a closer glimpse into the mind state of both of these men. They are standing at two opposite ends of the spectrum and it is interesting to watch them face off.

The video is a great watch, especially for anyone who has been waiting for Dr. Fauci to be put in his place. He’s been a smarmy, condescending jerk all year and we are about tired of it. It is one thing to ask people to make certain concessions for the sake of public health. It is quite another to ask them to sacrifice years of their life without providing any sort of end date.