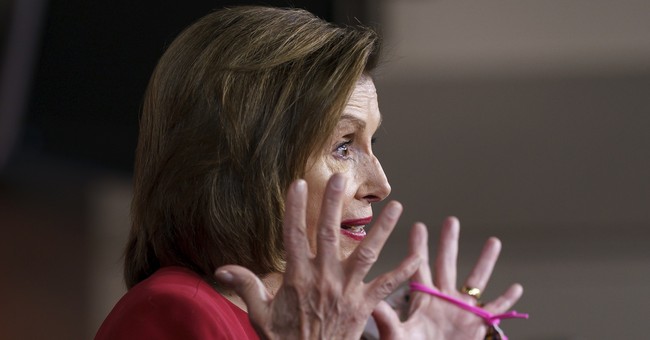 Lost in the shuffle of Joe Biden’s most excellent, G20 adventure has been House Speaker Nancy Pelosi.

Pelosi was her normal, incoherently rambling self at her regular Thursday press briefing this week, this time while being questioned about calling Biden’s ridiculously named “Build Back Better” Act “transformational.” The only thing transformational about Nancy Pelosi is how stage 4 Trump Derangement Syndrome has transformed her already pickled brain from simple mumbling mush to bitter mumbling mush, but I digress.

As I was saying, Pelosi went Pelosi while responding to a question about the pretend-“infrastructure” monstrosity when she was challenged by the reporter, as transcribed by CNSNews:

“You and the President have called this legislation ‘transformational’- the Build Back Better Act. But, how is this transformational if you’re having to cut things like paid leave … these major climate programs – and what are the plans?”

“Well, thank you so much for your question. [Uh-huh] It is transformative. [Sure it is] And it is historic. [Only in the sense that it’s an attempt to transform America into a socialist hellhole.] And it’s the issues that it addresses. And it’s not issues. [Huh?] These are values. [Says whom?] And the resources that are allocated there.”

Pelosi goes forth, repeating herself, as she is wont to do.

The intrepid Speaker then dons her “save the planet from the existential threat of our time” cape and told it like it is — in her delusional mind and the minds of equally delusional Democrats across America.

She continues: (Emphasis, mine)

“Because we’ll have a half a trillion dollars to save the planet and that’s a jobs issue. [Huh?] Well, it’s a health issue, first of all: clean air, clean water, addressing the asthma issues and all the rest and the environmental injustice of it all.

“It’s a health issue. It’s a jobs issue – of green, new green technologies, had America be [sic — huh?] pre-eminent in the world in those technologies.

“It’s a national security issue, as our security experts tell us that conflict that could arise from competition for habitat and resources, because of rising sea levels and all of the other consequences of climate, the climate crisis.

“And it is a values issue: for us to be – honor our responsibility to future generations, pass this planet on in a responsible way. And the fuse is growing shorter on the timeframe for us to do that. Matters are getting worse. And we are not going to make matters worse. We’re going to pass this legislation.”

Pelosi then says (lies about) whose goals were what.

“And, as I say that, we have to – What this legislation will do is to help the president meet his goals, the goals of America, for how we reduce emissions and pollution and the rest.”

How can I put this, tactfully? What a complete crock of crap. A September 21 Gallup poll listed the “most important problems” as follows.

Economic problems, in order of importance:

Notice anything, Madam Speaker? Under “non-economic problems”? I do.

Environment/Pollution/Climate Change: #8. The government/Poor leadership: #2, Immigration: #3, and Unifying the country: #4. So how are you and Joe doing in those three areas, Madam Speaker?

One need look no further than “the most important problems” to see how far out of touch Biden and the Democrat Party are with the strong majority of Americans — across the board.

Between Pelosi and Biden — oh, never mind. Finish the sentence, yourself.

Check out a few other recent RedState Pelosi/Biden articles: