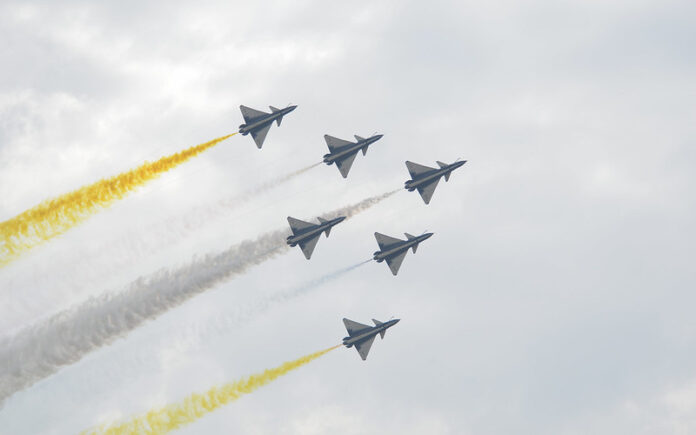 The Communist nation has been working on obedience from its citizens. It’s been working toward becoming the manufacturing go-to for countries all over the world. And, they’ve been working to grow their military for decades.

The amount of military activity has been on the rise.

A military exercise occurring near Taiwan should leave everyone feeling a bit on edge.

Global Times, the state-run newspaper has said that it “could be a rehearsal of a reunification-by-force operation.”

China, as in the People’s Republic of China (PRC), wants to gain control of Taiwan once more.

Taiwan has managed to maintain its distance from PRC for years, though they don’t have the representation that they wish they could have. They, too, are China. However, they are the ROC, the Republic of China. As a democracy, they run things a lot differently – and they have a much smaller population.

The Chinese People’s Liberation Army (PLA) chose to conduct an exercise near the island of Taiwan where they had the largest number of warplanes present that has ever been recorded.

Reunification-by-force is an interesting way to explain an invasion.

What if Taiwan doesn’t want to reunify? Too bad, they’ll be taken by force.

Democracies don’t blend well with communist countries, so the forceful reunification could end up being a bloodshed.

The “exercise” was an excessive display of force, featuring over a dozen J-16 strike fighters along with several multirole fighters, strategic bombers, and anti-submarine warfare-capable aircraft.

This isn’t the first time that PLA has wanted to show off its strategy to Taiwan in an “exercise” – they’ve been increasing their exercises since September 2020.

Song Zhongping, a Chinese military expert and TV commentator, shared some insight into the proposed strategy, explaining that the exercise could be the way for PLA to rehearse its combat plan. When PLA decides they’re ready to take Taiwan, it could include an air superiority seizure along with attacks on both land and maritime targets. This includes being able to attack warships of foreign countries should they wish to interfere.

Why now? What makes PLA want to show off their military strength?

It’s their way of responding to the United States issuing guidelines that allow them to deepen its “unofficial” support of Taiwan. After all, these guidelines were issued just two days before the exercise took place.

It’s serving as a warning, according to Global Time. Taiwan successionists and the United States are being told to watch out and not rock the boat.

China is certainly showing off its complicated relationships. Taiwan views itself as China, but as a separate China from the People’s Republic of China. As such, the entire world has had to decide who they want to view as the real leaders of China: ROC or PRC.

Unfortunately, most people are choosing to recognize PRC simply because of their size and their monstrous demands for attention.

Beijing, the capital of PRC, still considers Taiwan an extension of who they are and who they can control. However, it’s more a “renegade province” and PRC is looking to reunify the island.

The island off the southeast coast of China may be forced into unifying with mainland China – and the exercises are being used to show Taiwan just how much force could be used if they decide they don’t want to reunify peacefully.

As for the other countries who wish to offer Taiwan help from the big, bad People’s Republic of China? Well, PLA has already made that clear. They have the firepower aimed at the warships for anyone who dares to interfere.

The questions remain: how far will PLA take things in order to get Taiwan to reunify? And if they get Taiwan, what nation will they come for next?