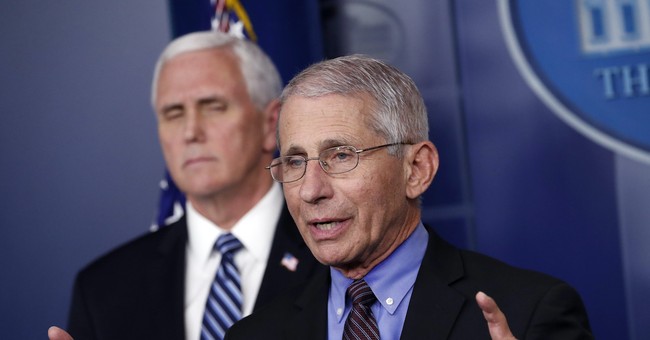 Anthony Fauci has stated that the EcoHealth Alliance grant was not for gain-of-function research. A comparison to other similar research conducted and labeled as gain-of-function shows that the two types of research are identical and Fauci’s claims are untrue.

If you’ve been following my reporting on the origins of COVID-19, you’ll already know the name EcoHealth Alliance. For those that don’t, EcoHealth Alliance is a non-profit based in New York, which has been conducting research on global pandemics and has been seeking to identify places where pandemics are likely to start, as well as viruses that may be likely to ignite those pandemics. To be frank, their goal is a reasonable and lofty one, however, it is their methodology that I question, as well as their actions in the wake of the COVID-19 pandemic.

EcoHealth Alliance has been around for several decades, however, the present iteration under that name has only been in existence since 2010. In 2014, the group was awarded a grant from the National Institutes of Health (NIH) to study Bat Coronavirus Emergence Risk, specifically the risk associated with these viruses in China. The project summary is as follows:

Understanding the Risk of Bat Coronavirus Emergence Novel zoonotic, bat-origin CoVs are a significant threat to global health and food security, as the cause of SARS in China in 2002, the ongoing outbreak of MERS, and of a newly emerged Swine Acute Diarrhea Syndrome in China. In a previous R01 (Funded Research) we found that bats in southern China harbor an extraordinary diversity of SARSr-CoVs, some of which can use human ACE2 to enter cells, infect humanized mouse models causing SARS-like illness, and evade available therapies or vaccines. We found that people living close to bat habitats are the primary risk groups for spillover, that at one site diverse SARSr-CoVs exist that contain every genetic element of the SARS-CoV genome, and identified serological evidence of human exposure among people living nearby. (clarification added)

While a lot of that sounds like word soup to some of you, let’s break it down and take a look at what they are saying. They start by saying that in a previous research project, they identified bat coronaviruses that were similar to SARS, that could infect the ACE2 receptor in human cells, causing SARS-like illness. The research they are discussing, however, and what is authorized by this grant, is for research on natural “zoonotic” viruses, meaning those found in nature that can jump to humans either directly or through an intermediate host (jumping from bats to another animal, to humans). They found that the population at greatest risk were people who lived close to bat habitats (this will be important later).

As for their aims, I will try to simplify the best I can:

Aim 2: They were to analyze where “spillover” (bat to human infection) events were likely to occur and assess the public health consequences of potential infections for SARS viruses.

Thus far, it all seems pretty straightforward and doesn’t raise any red flags. Now, remember this grant has stated several times it is only to study natural viruses. Fauci has been adamant that this funding was only for natural viruses. The problem with that is, the research described in Aim 3, steps way beyond natural viruses.

We will use S protein (spike protein) sequence data, infectious clone technology, in vitro and in vivo infection experiments and analysis of receptor binding to test the hypothesis that % divergence thresholds in S protein sequences predict spillover potential.

Now, while most of this seems nebulous thus far, there’s something you should know: If you were going to create a virus like SARS-CoV-2, this is the exact type of research you would have to conduct to map how to do so. But while Dr. Fauci and EcoHealth Alliance would like to tell you that this isn’t “gain-of-function research,” it isn’t hard to find out whether or not it was because… The NIH has funded this type of research previously. That same study from yesterday’s article is pretty clear about EcoHealth’s supposed research.

Together, these data and restrictions (The US Ban on gain-of-function research) represent a crossroads of GOF research concerns; the potential to prepare for and mitigate future outbreaks must be weighed against the risk of creating more dangerous pathogens. In developing policies moving forward, it is important to consider the value of the data generated by these studies and whether these types of chimeric virus studies warrant further investigation versus the inherent risks involved. (clarification added)

The three takeaways from this are: 1) that it was unequivocally gain-of-function research; 2) that the research was justified despite the understanding they were creating more dangerous pathogens; and 3) they used chimeric (artificial hybrid) viruses to predict the risk of the outbreak of these viruses.

As a reminder, this very research was approved and funded by the NIH, the NIAID, and EcoHealth Alliance, and involved research conducted at the Wuhan Institute of Virology. This is factual, inarguable, and cannot be avoided by parsed language.

And what exactly did these studies involve? Well, very suspiciously, they involved procedures that use spike (S) protein sequences, infectious clone technology, in vitro and in vivo experiments, and analysis of receptor binding, and were used to predict the likelihood of a viral outbreak.

Why are the two experiments suspiciously the same? Well, that’s because they are. In fact, in order to predict viral pandemics, which both of these studies sought to do, known viruses in nature are modified to see if the “new virus” might infect human cells. Without that genetic modification and without creating chimeric viruses in a lab, there would be no viruses to test to predict potential future viral outbreaks. As discussed in yesterday’s article, EcoHealth Alliance was warned for not reporting the creation of a chimeric virus which was determined to be an Enhanced Potential Pandemic Pathogen. I stated in that article a condemnation of the creation of a chimeric virus wasn’t in that letter, just that the results weren’t reported. The 2015 study created a chimeric virus using one of the same viruses. Gain-of-function research and experiments are required for these types of predictions to assess the likelihood of whether or not a virus will mutate and whether or not those mutations will ever infect human cells.

The point? This EcoHealth Alliance grant was always supposed to involve gain-of-function research that could create Enhanced Potential Pandemic Pathogens. Certainly, the research would not always succeed in creating new viruses, and certainly, those viruses would not always be viable, and certainly, the viable viruses did not always have increased virulence or transmissibility. Regardless, the potential and possibility exist that this research could have created Enhanced Potential Pandemic Pathogens, which is the exact purpose of this very grant: to identify those potential viruses.

For Fauci to suggest that wasn’t the intent, flies in the face of the very description of this grant, and the history of other similar research which we have shown was, by their own admission, gain-of-function. This research intended to create chimeric viruses to predict the likelihood of those mutations occurring in nature, and whether or not those mutations would ever infect humans. This has been the exact type of research he has been excusing with his defense of gain-of-function for a decade.

Again, do I think that my articles will lead to his firing or arrest? No. But I can hope that when others begin to wake up, you and I can state that we’ve been ready for action against him for a long time.