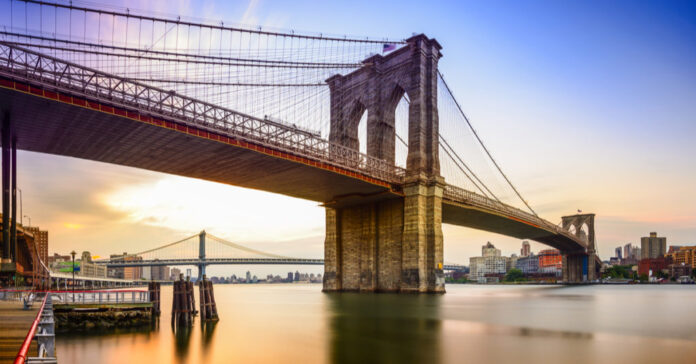 Since the first vaccine was announced, we knew it would be a big deal. But few of us probably guessed that our federal government would use it as a way to force us into submission, trample our constitutional freedoms, and ignore our God-given rights. Maybe we should have seen it coming, given the path the liberal left has taken the past few years.

In any case, here we sit, a mere ten months after the induction of Democratic President Joe Biden, facing the biggest threat to our humanity, economy, and beliefs that we have ever known.

Thankfully, Americans everywhere are proving they aren’t just going to lay down willingly. Even in liberal New York City, crowds are rising up and standing for what is rightfully ours: the decision to get the vaccine or not.

In fact, in the Big Apple, over last weekend, so many stood up for their rights that all traffic on the famous and historical Brooklyn Bridge was stopped when a protest against the radical vaccine mandate walked over it.

According to the New York Post, about 5,000 New Yorkers joined together in a march across the bridge to protest the recent mandate by our liberal leaders.

As you well know, the mandate started with Joe Biden, ordering that all companies of at least 100 or more employees begin requiring the vaccine. And while it’s not an executive order, legislative law, or even an approved guideline by OSHA yet, companies all over have fallen in line.

Cities and municipalities, too, have taken Biden’s wishes and ran with it, such as the socialist New York City Mayor Bill de Blasio.

According to de Blasio’s mandate, all city employees must have received their first COVID-19 vaccine by the end of the week, 5 p.m. on October 29. If they do not, they will be put on unpaid leave and then fired if they still do not comply.

However, based on the size of the protest for the mandate, I’d say city employees are taking the mandate too well, many of whom are first responders for the city.

She explained to the Post that she and her coworkers have handled “countless emergencies,” including Hurricane Sandy, snowstorms, etc. And yet, now that she doesn’t want to get the vaccine, she’s suddenly the enemy and a threat to public safety?

She says, “We are under threat of losing our livelihood for simply retaining the choice of protecting our bodies. We are now being bribed and coerces to take a medication… We are not now nor have ever been public health threat.”

But that’s exactly what de Blasio and Biden are treating them like. These same people have toed the line between right and wrong, who have helped community members far and wide, who have picked up the pieces of burning lives, held the ones left behind, and rebuilt homes not out of a sense of obligation but civic duty and community.

People like firefighter Paul Schweit, who told the Post that he wants to “continue protecting” the city and its residents. But if de Blasio has his way, he soon won’t be allowed to. Instead, he’ll be painted “as immoral, unsafe, and a danger to the public.”

He and apparently about 5,000 others will soon be out of a job and the city out of protectors.

As you well know, NYC has seen a massive uptick in crime over the last year following calls to defund the police and then numerous decisions that have given criminals the upper hand. And things are just getting worse.

But de Blasio wants to potentially lay off the few remaining police officers, firefighters, and EMTs he has left? Who will protect him and his citizens, then? You’d think he’d realize the full gravity of the situation given the last year of rising crime that has coincided with the decrease in police presence. Then again, de Blasio and his ilk have never been labeled as particularly bright before, have they?